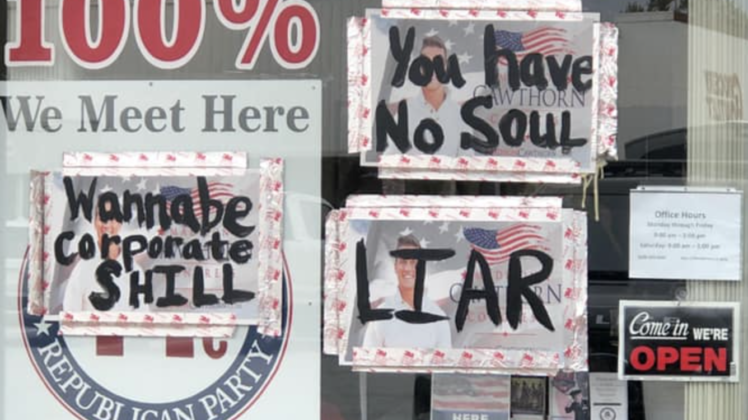 Madison Cawthorn, a Republican running for Congress from North Carolina, says Antifa thugs targeted his home as well as the nearby Republican Party headquarters.

Cawthorn, who is confined to a wheelchair because of a car accident, blasted the “gross acts of vandalism” and called out his Democrat opponent for refusing to denounce the attacks.

“My opponent’s strike force inflicted thousands of dollars of damage to both public and private property,” Cawthorn wrote on Facebook. “The Henderson County GOP office, which was defaced with graffiti, many businesses, and local homes who displayed support for both my candidacy and other Republicans were attacked and their signs defaced.”

Cawthorn said his home “was targeted and my property vandalized by thugs acting in support of my opponent’s vision for this district. These left-wing enforcers spray-painted threats of violence and echoed my opponent’s words, as they symbolically crushed my neck and head on each sign deposited on my property.”

Davis, a retired Air Force colonel, has a notorious history of making slanderous comments against Cawthorn.

“The most disturbing report about last night’s events involves my opponent refusing to denounce these acts of aggressive violence,” Cawthorn said. “Rest assured that attempts to silence our message of hope for this district will not succeed. Let us continue to pray for these troubled people that they may find peace.”