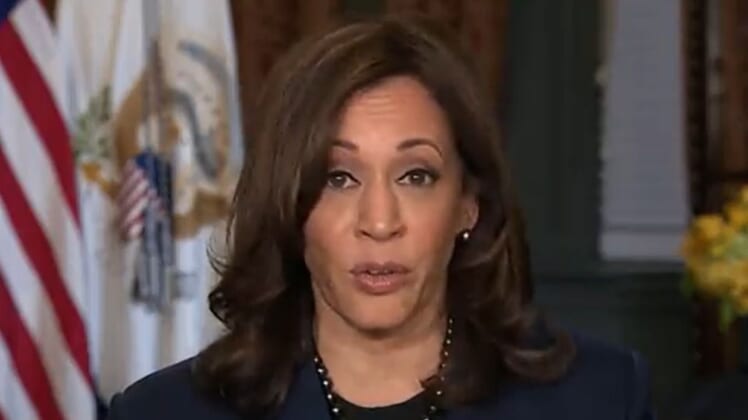 Vice President Kamala Harris is getting shoved under the bus by a leftwing outlet that wants President Biden to pick “someone else.”

“Kamala Harris had her chance. The Democrats need something different,” Christina Cauterucci wrote in a column for the liberal magazine, Slate.

The only way to get uncensored conservative news is by subscribing to Todd’s FREE newsletter. Click here to sign up.

Biden celebrated his 80th birthday making him the first octogenarian president in U.S. history, and while he has gone viral for lies and verbal gaffes on the regular, Harris, whom he tapped as the border czar has also gone viral for her verbal “word salad.”

And although Biden has referred to Harris as “president” more than once, even progressives think she’s a bad candidate going into 2024.

“A second Biden term would mean even higher stakes for a vice-presidential pick—not only because Biden is older than he was the first time around, but because the VP serving when he leaves could be the de facto frontrunner in the 2024 Democratic primary,” Cauterucci wrote.

“Harris, a proven dud of a presidential candidate who has done little to distinguish herself since, is not a good choice for the Democrats’ top billing,” she explained.

The Slate senior writer and host of Outward, Slate’s podcast about queer life, recounted just how rough Harris’s performance was on the campaign trail with Biden:

It’s not just that Harris was a bad presidential candidate. She was a bad vice-presidential one, too. I will never forget how clumsily she struggled to respond to what should have been an easy, predictable question from Norah O’Donnell in a 60 Minutes interview a few weeks before the 2020 election. Asked whether she would push Biden to the left and bring a “socialist or progressive perspective” to the White House, Harris first answered with a “no.” She continued, audibly annoyed:

This is the response of a candidate who, when pressed to the point of discomfort on matters of policy, instinctively pivots to her biography. That might have flown in the 2020 election, which was rightfully sold as an emergency situation in which everyone needed to band together to protect the country from incumbent Donald Trump. But in 2024, the landscape is going to look much different. I suspect voters will be less enchanted by vague gestures in the direction of unity and normalcy. They will also be less willing to forgive a candidate who can’t provide a clear, consistent message. Will Harris be prepared to communicate Team Biden’s accomplishments and defend its perceived failings? Or, with her eyes set on 2028, will she be unwilling to take a firm position she might have to carry into her next campaign?

Harris has polled lower than Biden and former Vice President Mike Pence when it comes to favorability, the LA Times reports.

“If Harris cares about the future of the Democratic agenda, she should gracefully step aside,” Cauterucci concluded.