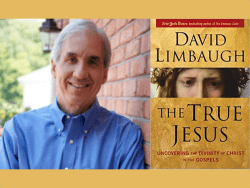 Bestselling author David Limbaugh made it clear that he doesn’t have a lot of love for Never Trumpers when he joined the Todd Starnes Show Wednesday.

Click here for a free subscription to the Todd Starnes Newsletter: a must-read for Patriots!

Limbaugh discussed the recent revelation that the Trump-Russia dossier had been financed by the Clinton campaign, the hypocrisy of the left about Russia, and his frustration with the “Never Trump” crowd.

Limbaugh called the recent revelations that the Clinton camp had funded the Fusion GPS dossier accusing the Trump campaign of colluding with the Russians “objectively shocking,” but added that it “doesn’t shock some of us who know what the Democrats have been up to.”

“It’s noteworthy that the Democrats have been fabricating this story of collusion between Trump and Russia and have not been able to come up with a scintilla of evidence in over a year,” Limbaugh said. “And yet all the [Democrats] continue to say that there’s something there, they’re outraged and they just can’t wait for it to all reveal itself, and there’s already enough there.”

Limbaugh, author of “The True Jesus”, pointed out that “now we have actual evidence of Clinton’s collusion with Russia, not just on this dossier but also on the uranium scandal, and the Clinton Foundation profited — and the Obama administration compromised our national security.”

The bestselling author brought up the hypocrisy on the Left over their sudden change in attitude over Russia, reminding the listeners of the Todd Starnes Show that Democrats had ridiculed Republicans over their strong on Russia stance in years prior.

Limbaugh mentioned former Massachusetts governor and presidential candidate Mitt Romney, who in a 2012 presidential debate was mocked for his tough stance against Russia by then President Barack Obama who said “the 1980’s called, they want their foreign policy back.”

“The Never Trump mentality is self-pervasive among certain people that they all think alike.  Anytime you say something bad about Democrats they say yes, Democrats are terrible, but what about trump? And they accuse us of what aboutism,” he said. “It’s a dangerous obsession of these people,” he added.

Limbaugh said that Never Trump Republicans get so hung up over Trump personally because he’s “not proper enough for them” and that they don’t seem to care about policy anymore. “Don’t you think it’s critical,” Limbaugh asked. “After eight years of destructive policy by Obama, that we focus on reversing that destructive agenda?”