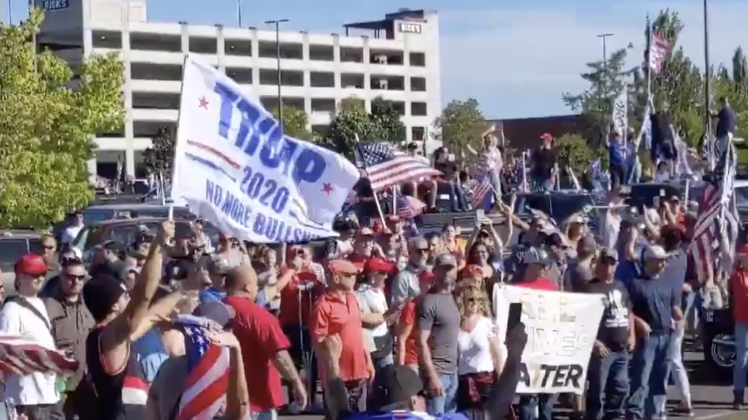 More than a thousand people turned out to celebrate President Trump at a rally in the Portland suburb of Clackamas. Afterwards a caravan featuring hundreds of cars, pickup trucks and big rigs drove through downtown Portland.

It was a peaceful celebration – not a single building was burned. Not a single business was looted And there was no bloodshed on the streets.

Clearly, the good people of Oregon reached their breaking point. They are disgusted with Democrat leaders who have allowed a once beautiful city to be defiled and desecrated by Antifa and Black Lives Matter thugs.

The Todd Starnes Show team has compiled video of the celebration and caravan below.

Here’s the a Trump parade in Portland, OR pic.twitter.com/oIWdY8gyBt

This is taking place in a Portland suburb (Clackamas). The event is peaceful. They’re all going to drive into Portland. Antifa have used nails and other sharp objects to pop tires at their riots. pic.twitter.com/kBuh0Fd1rI

This isn’t the official route of the Trump rally, but there is still an endless stream of Trump vehicles coming in to downtown Portland. pic.twitter.com/h0zg8WMVtg

Cruise rally for President Trump has made it into Portland. They are heading towards Downtown. pic.twitter.com/8j1u95BcPw

Speeches are being made at the heart of the Trump rally at Portland mall (Clackamas Town Center) today pic.twitter.com/boa4Bb8e7c