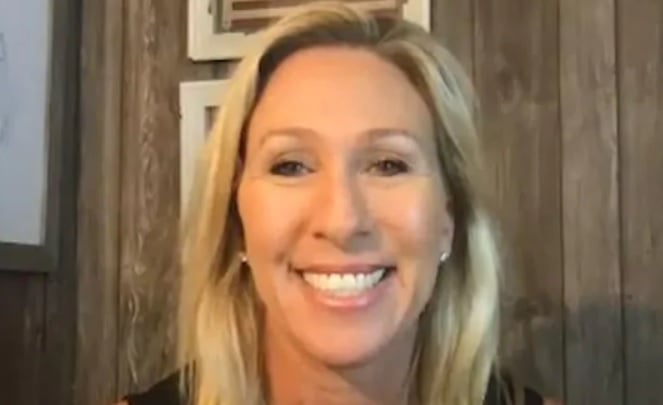 “We have more border security here around the Capitol than we do at our southern border.” – Rep. Marjorie Taylor Greene on Democrat’s hypocrisy

Rep. Marjorie Taylor Greene (R-GA) says the Democratic Party’s hypocrisy is on full display on the COVID-19 relief bill and the border crisis.

Greene called out her Democratic colleagues Monday on the Todd Starnes Radio Show.

“We have more border security here around the Capitol than we do at our southern border,” said Greene.

“There’s no one invading the capitol, nobody, but down at the border we have Biden’s border crisis where he’s ripping our borders wide open,” she said.

According to Greene, Biden opened up schools at the border at 100% capacity, meanwhile schools all over the country aren’t open and are being treated like “kids in cages” where they can’t go to school.

Regarding the COVID19 stimulus bill, host Todd Starnes called it “despicable” and is being used to fund many left-wing causes including abortion.

The nationally syndicated radio host mentioned on his show that the fault was not as much on the Democrats, but on the never-Trump Republicans.

One group of Never Trumpers, the Pro-Life Evangelicals for Biden, released a statement saying the group feels “used” and “betrayed” by the president in terms of abortion.

The Biden administration recently declared support for a COVID-19 relief bill that would repeal the Hyde Amendment, which bans federal funding of abortion in most instances.

“Every time I see one of these radical pieces of legislation that is signed by Biden, I don’t blame the Democrats,” said Starnes. “I blame the Never Trump Republicans. They are the ones who fought President Trump tooth and nail. I blame them for what’s happening to our country right now.”