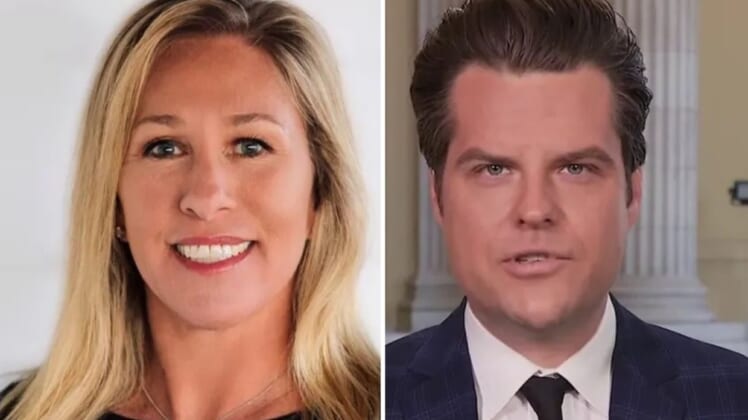 Reps. Matt Gaetz (R-FL) and Marjorie Taylor Greene (R-GA) made a stop in Maricopa County, Arizona, the stomping grounds of an ongoing election audit, Friday night, as part of the “America First” tour.

In an April press release, Gaetz announced the tour would be an attempt to “rally the 74 million Americans that voted for President Trump in the last election and highlight the destructive failings of the radical left and their puppet in the White House, Joe Biden,” The Hill reports.

“The civil war is over. We’ve won. This is Donald Trump’s Republican Party,” Gaetz said. “You cannot kill an idea.”

The Arizona rally turned out at least 3,000 energized supporters and drew over 150,000 online viewers, according to the Post Millennial.

“Thousands of miles away, in the swamp of Washington, they kind of hoped that this was all over, that our populist little revolt would run away and no longer be a part of our national identity,” Gaetz said. “Oh, we are just starting.”

Two weeks earlier, the fierce allies of former President Trump kicked off the tour in The Villages in Florida, slamming COVID-19 lockdowns and moderate Republicans.

“Just because you have an ‘R’ by your name and you say things doesn’t mean you’ll do them when you run the country,” Greene said. “This is why so many people don’t vote. They don’t trust Republicans to do the job.”

Gaetz also announced he is filing legislation to make vaccine mandates illegal saying, “We will not allow the public health bureaucracy to be a new entity to drain our liberty away in the United States of America.”

The conservative duo’s next stop is Dalton, Georgia, which is Greene’s home district, on May 27.