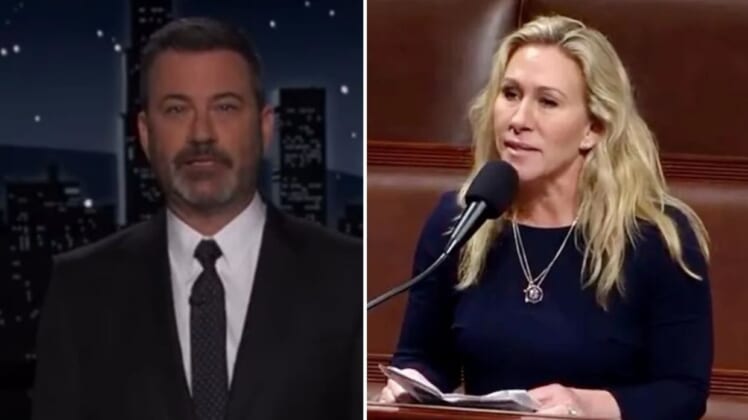 Rep. Marjorie Taylor Greene (R-GA) says she has reported comedian Jimmy Kimmel to the Capitol Police, claiming a joke he made during his show was actually a “threat of violence against me.”

Greene made her announcement in a Wednesday tweet. It came after she had tweeted on Monday about Republican Sens. Lisa Murkowski of Alaska, Susan Collins of Maine, and Mitt Romney of Utah, backing President Joe Biden’s pick for the Supreme Court, Ketanji Brown Jackson.

.@ABC, this threat of violence against me by @jimmykimmel has been filed with the @CapitolPolice. pic.twitter.com/nxYX1LF2jK

In the Monday tweet, she wrote: Murkowski, Collins, and Romney are pro-pedophile. They just voted for #KBJ.”

Murkowski, Collins, and Romney are pro-pedophile.

They just voted for #KBJ.

The Hill noted Jackson had faced questions from some Republican senators over her record as a judge in sentencing child sex offenders during confirmation hearings.

Kimmel’s joke came during his monologue on his ABC show “Jimmy Kimmel Live!”

Kimmel then added: “Wow, where is Will Smith when you really need him?”

The Will Smith line referred to the incident at the Oscars where the actor struck Chris Rock after the comedian made a joke about Smith’s wife. Continue reading at Newsmax.