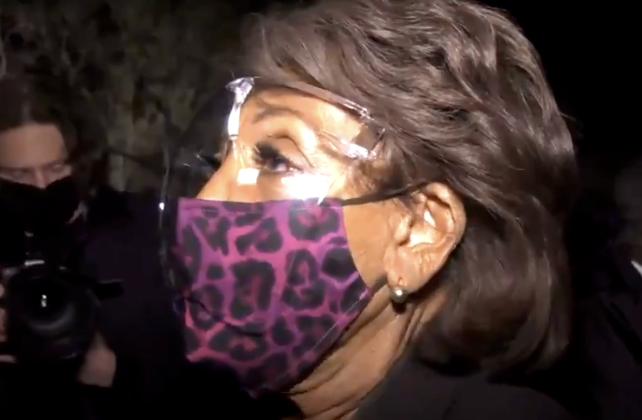 Rep. Maxine Waters (D-CA) is calling for citizens to rise up if ex-police officer Derek Chauvin is acquitted in the death of Minneapolis resident George Floyd.

“We’ve got to get more confrontational,” Waters said during a stop in Brooklyn Center on Saturday. “We’ve got to make sure that they know that we mean business.”

“We’ve got to stay in the streets, and we’ve got to demand justice,” she declared.

“We’re looking for a guilty verdict” in Derek Chauvin’s trial for the police killing of George Floyd, she said. “And if we don’t, we cannot go away. We’ve got to get more confrontational.”

Either find Derek Chauvin guilty – no matter the evidence – or we will burn down your cities. That’s the implied threat.

“Maxine Waters is inciting violence in Minneapolis — just as she has incited it in the past,” McCarthy said in a statement. “If Speaker Pelosi doesn’t act against this dangerous rhetoric, I will bring action this week.”

.@RepMaxineWaters told BLM terrorists to “stay on the streets” and “get more confrontational.”

She should be expelled from Congress. https://t.co/vJF9etntnk

Republicans were right to be stunned and alarmed at Waters’ unhinged comments.

“The Radical Left don’t care if your towns are burning, if there’s violence in your streets, or if the police are too defunded to defend their communities. As long as the Left appeases their anti-America base, their job is done,” Rep. Andy Biggs, R-Ariz., wrote on Twitter.

Waters is a known race agitator.

She infamously called on her gang of followers to get in the faces of Trump supporters and administration officials. She urged them to “absolutely harass” them in grocery stores, parking lots and gas stations.

Most recently she screamed at Rep. Jim Jordan (R-OH) after he demanded to know from Dr. Anthony Fauci when Americans would get their freedom back.

“Shut your mouth,” the angry woman snarled at Jordan.

She literally told a lawmaker who wanted to restore liberty to shut his mouth.

Waters should be charged with jury tampering at the least and inciting a riot at the most.

Maxine Waters is marching in Brooklyn Center tonight and told people to take to the streets if Chauvin is acquitted pic.twitter.com/RemfvCCLAn