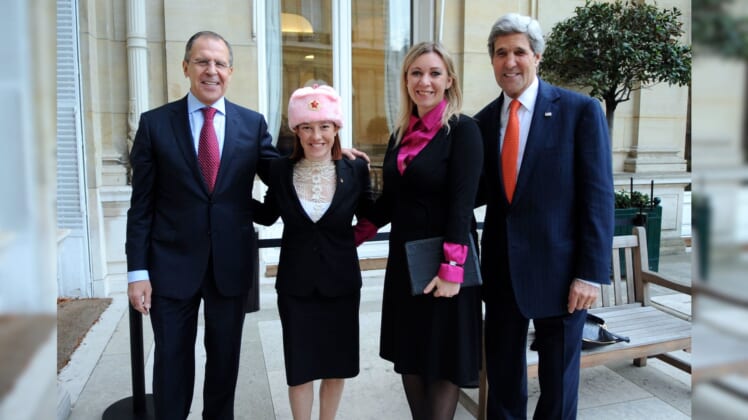 USA Today is getting roasted on social media after they issued a “fact-check” on a photograph that shows Joe Biden’s soon-to-be press secretary wearing a fur hat adorned with a Communist hammer and sickle logo.

Psaki is seen wearing a pink shapka, or fur hat, that bears the communist hammer-and-sickle logo as part of a gift exchange between herself and her Russian counterpart Zakharova.

Why in the world would any freedom-loving America wear anything that promoted a murderous Communist regime?

Why are you fat checking this? No one’s making a claim just showing her wearing a commie hat… THATS A FACT!!!

If the media stopped running cover for Democrats as their primary mission maybe they have some credibility left. https://t.co/DtcKwkAev9

USA Today jumped in and provided cover for Psaki after conservatives raised concerns.

“The claim: A photo shows Jen Psaki wearing a hammer and sickle hat while posing with officials from Russia,” USA Today wrote before reporting that Psaki did not end up keeping the hat according to a source familiar with the gift exchange. “Our ruling: Missing context.”

The “fact check” explained, “The image is real, but claims that the hat was anything more a gift or that Psaki was with Russian officials in any capacity beyond her official role are MISSING CONTEXT.”

Missing context? She’s got a Communist hat on her head. It’s absolutely inexcusable.

“Why are you [fact] checking this? No one’s making a claim just showing her wearing a commie hat… [THAT’S] A FACT!!!” Donald Trump Jr. exclaimed. “If the media stopped running cover for Democrats as their primary mission maybe they have some credibility left.”