Netanyahu Sticks It to Blinken on Iran Nuclear Deal 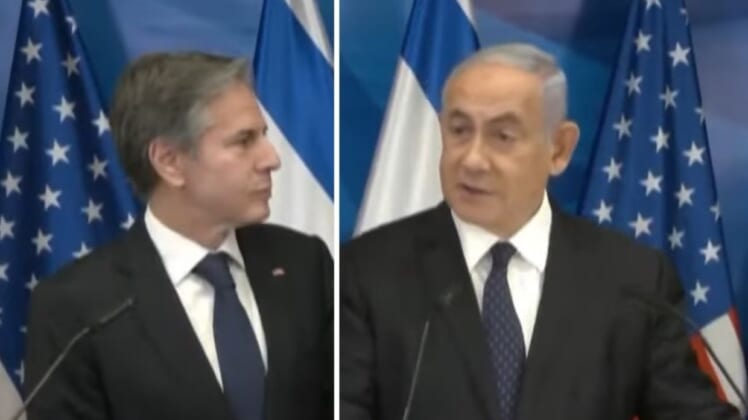 Netanyahu said he hopes America “will not go back to the old” Iran nuclear deal ” because we believe that that deal paves the way for Iran to have an arsenal of nuclear weapons with international legitimacy.”

He added: “We also reiterated that whatever happens, Israel will always reserve the right to defend itself against a regime committed to our destruction, committed to getting the weapons of mass destruction for that end.”

Blinken said the U.S. will still pursue Biden’s goal of returning to the Iran nuclear deal, which was negotiated by former President Obama while Biden was vice president. He also reiterated the White House’s support for “Israel’s right to defend itself.”

Biden took credit Monday for the ceasefire between Israel and Hamas. And despite former President Trump’s Middle East peace deals with Israel, Biden took a swipe at him for not treating Palestinians good enough.

“Following up on our quiet, intensive diplomacy to bring about a ceasefire between Israel and Hamas, I have asked my Secretary of State, Tony Blinken, to travel to the Middle East this week,” Biden said in a statement. “During his trip, Secretary Blinken will meet with Israeli leaders about our ironclad commitment to Israel’s security. He will continue our Administration’s efforts to rebuild ties to, and support for, the Palestinian people and leaders, after years of neglect.”