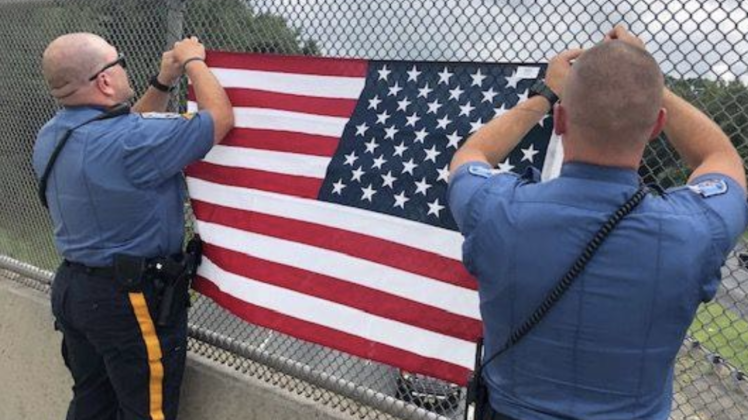 Hundreds of New Jersey residents turned out Sunday to protest a decision made by state leaders to remove American flags that had been posted on overpasses across the state to honor our military veterans and those who lost their lives in the Muslim terrorist attacks of 2001.

The New Jersey Turnpike Association has already confiscated an untold number of signs and replaced them with warning placards.

“Placement of signage or items of any nature on this structure is strictly prohibited,” the message read.

The flags had been maintained and replaced over the years by groups of veterans, police departments and volunteers.

The union representing police officers in Robbinsville was especially upset to discover that newly purchased flags had been confiscated by the New Jersey Turnpike Association.

“We cannot understand why the NJTPA. has suddenly decided to abandon a tradition of patriotism and respect for our veterans. It is not known what happened to the brand new flags that we put up, but we truly hope they were respectfully disposed of, if not displayed elsewhere,” union leaders wrote in a statement.

The New Jersey Turnpike Association says they made the decision to remove all of the flags because they could not guarantee all the flags would be properly maintained.

“While we appreciate the desire of some New Jersey residents to express their patriotism in these turbulent times by displaying flags on Turnpike and Parkway overpasses, Turnpike Authority regulations do not allow it, and for good reason,” it wrote.

The very least they could do would be to return the dozens of flags that were purchased by police officers.

“The Turnpike and Parkway run through more than 100 municipalities and include more than 1,100 bridges and other structures. The NJTA cannot adequately monitor flags mounted by private citizens to make sure they are safely and securely hung, properly displayed, and respectfully maintained.”

Or maybe Old Glory has fallen victim to the Cancel Culture mob. That’s the only viable explanation for ending a 19-year tradition of flying Star-Spangled Banner from a taxpayer-owned overpass.