BIZARRE: Charlottesville Mayor Compares Her City to a Rapist 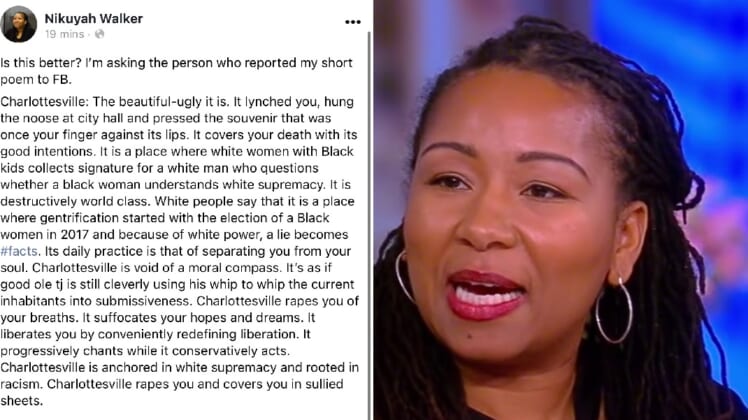 Charlottesville, Virginia Mayor Nikuyah Walker raised some eyebrows after she graphically attacked her own city on social media Wednesday.

“Charlottesville: The beautiful-ugly it is,” Walker wrote. “It rapes you, comforts you in its cum-stained sheets and tells you to keep its secrets.”

“Charlottesville is void of a moral compass. It’s as if good ole [Thomas Jefferson] is still cleverly using his whip to whip the current inhabitants into submissiveness,” she added.

In a longer post, she talks about “white women with Black kids” and “White people” and “Black women,” pointing to “white power.”

“Charlottesville is anchored in white supremacy and rooted in racism,” Walker claimed.

Many in the city are upset with shocking message.

“I have to speak candidly and honestly. I mean, it’s hurtful, I think it is offensive, I think it is over the line,” Councilor Michael Payne told CBS19 News. “I’ve heard from multiple community members who have been survivors of sexual assault and sexual violence, and seeing this kind of language is just extremely hurtful to them.”

One resident told the local news it disgusted and disturbed them to have it come from a public official, let alone the mayor.

The controversial mayor has palled around with other disgraced politicians before.

Bellamy was appointed in 2015 to the Virginia education board by former Governor Terry McAuliffe (D), but had to resign the next year after multiple tweets with racist and homophobic comments, as well as comments about rape, resurfaced online, Fox News reports.

Walker appears to view the poem as artistic expression. She posted a photo of a mug that says, “my art doesn’t understand you either.”