Obama Seethes With Rage, Yelling to Crowd that Trump is “Not Normal, Not Tough” 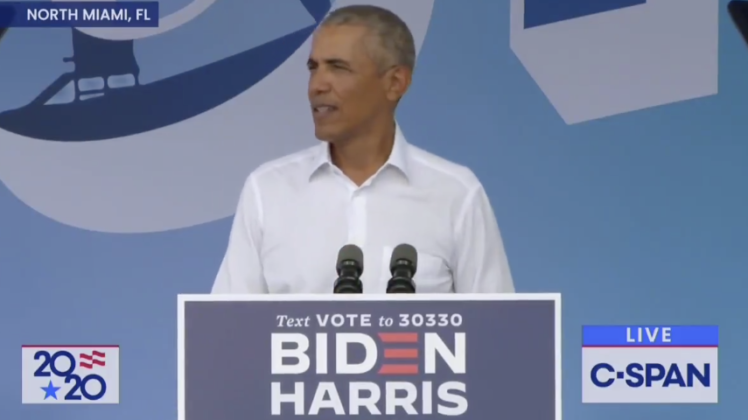 Former President Barack Obama delivered an angry speech in Miami, arms flailing as he raged against President Trump, accusing our Commander-in-Chief of being “not normal” and “not tough.”

It’s ironic coming from a man who relished leading from behind and once coddled dictators like Fidel Castro and the Iranian Ayatollahs.

It’s unclear how many people attended the drive-in car rally. CNN did not show any wide camera shots of the crowd. That’s very telling.

“What’d He Have Yesterday? 32 People, 35 People Showed Up,” President Trump said at another campaign stop, mocking the former president.

The Biden internal polling must be much lower than they thought.

Oh, look. It’s the guy who put the children in cages. #Obama pic.twitter.com/1q1TT8xAPW

Obama: "We will not have a POTUS who threatens people with jail for just criticizing him. That is not normal behavior, Florida. You would not tolerate it from a coworker … 'Florida man' wouldn't even do this stuff. Why are we accepting it from the the president?" pic.twitter.com/VkscnSJaqd

Former President Obama: "It's our job to make sure [Trump] doesn't get a second term." pic.twitter.com/nQ6ZmZXHuh

Barry Obama is raging in Miami delivering an unhinged attack on @realDonaldTrump. He’s screaming and flailing his hands like some sort of leftist loon. He’s terrified of our president.