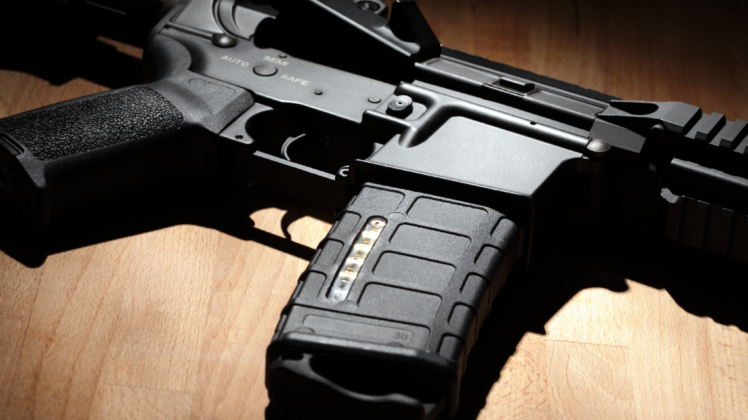 Legally owned guns save millions of lives a year in self defense, but Democrats will stop at nothing to take them away from you, Rep. Andy Biggs (R-AZ) said on the Todd Starnes Show.

TODD STARNES: [00:42:24] I want to go to the Patriot Mobile Newsmaker Line. Always good to have with us, our friend from Arizona, the great congressman Andy Biggs. Congressman, are you guys having that problem in Arizona? Just finding people that want to work.

REP. ANDY BIGGS (R-AZ): Oh, yeah. Yeah. Wherever I go in the country, small business owners, in particular, tell me. But, you know, even the big, big companies tell me they have trouble getting and keeping people because, as you say, too many disincentives to work. I mean, people want to stay home now.

STARNES: It’s I mean, that is a fundamental American characteristic is to go out there and put in a hard day’s work. And I’m afraid we’re raising a generation of young people that are more content with getting a check from the government. And I really shudder to think what this country is going to look like five, ten years from now unless the Republicans are able to put a stop to this nonsense in November.

BIGGS: I agree with you 100%. I look at it and I say, how did we become France? You can’t believe when I talk to these small business people, they’ll hire somebody, and as they’re walking out the door. They’re getting all the particulars. The person says, Well, I don’t want to come in at 8 a.m. or 9 a.m., you know, I got stuff I’ve got to do. It’s a little early and they don’t want to work five days a week, 8 hours a day… They don’t want to work. And it’s it’s undermining who we are as Americans. Because, as you say, one of the fundamental principles that made America so successful was our value of industry, individual industry. People were industrious. They got out, they worked, and they were creative. And we don’t see that so much now.

STARNES: So, Congressman, there’s been a lot of scuttlebutt up on Capitol Hill about this gun grab. President Biden saying again that the Second Amendment is not absolute, don’t know what part of shall not be infringed. He doesn’t seem to understand. Now, a House Democratic congressman, Don Beyer from Virginia, wants to introduce a bill that would hit a AR-15 with a 1,000% tax. What are you hearing about that?

BIGGS: A lot of laughs and giggles from our side. We can’t just kind of giggle about it because these people are serious. They do want to confiscate weapons and guns. I think that the Beyer bill, the 12% tax is absolutely not going to go anywhere. It’s too comical in some respects. It’s a tragicomedy, quite frankly. But then, on the other hand, don’t underestimate what they’re trying to do. They’re trying to implement nationwide red flag laws. They’re going to pass some kind of anti AR-15 legislation next week is my guess. They’re going to also pass this other bill that came out of the Judiciary Committee last week that is filled with all kinds of strange little, little programs to attack gun ownership.

STARNES: And that’s what concerns me because I think, you know, you can read the writing on the wall here. This is not going to stop. You can pass all eight pieces of this legislation and it’s not going to stop these bad guys from shooting people. It’s just not. So at that point, they’re going to come back and they’re going to say, okay, now we’re going to go after the handguns. We’ve got to go after the ammo. It’s a never-ending cycle with these people. And Congressman, I’m wondering at what point because, you know, these Democrats behave on emotion, all of these so-called, you know, mass shootings that have been happening. You wonder at what point are even some RINO Republicans going to make the switch?

BIGGS: Well, what I see happening I think it’ll be pretty close to party lines on these votes… I wouldn’t be surprised if all these bills come out. I mean, Lindsey Graham’s talked about supporting and Pat Toomey, you know, you’ve got the usual three. And so they get their 60 votes potentially, and it will not solve the problem. That was one of the points we were making is there are things you could do to harden the schools and make them safer. These are none of those. This will not accomplish what their stated purpose is because their unstated purpose, which they actually said last week, was to confiscate guns… And Biden has said already that he wants to go after nine-millimeter handguns because he thinks that they blow a lung out of somebody’s body, which is I mean, these people that have never handled a gun, I guess, don’t understand what they do and how they save literally millions of lives every year in self-defense. So it will accelerate. As you say. They’re happy to move incrementally to ultimately disarm Americans.

STARNES: And, Congressman, what do you think the end game of that is? Let’s just say the Democrats are successful and they’re able to start confiscating guns. What do you think happens in this country at that point?

BIGGS: Well, I don’t think they’ll be successful at taking guns out of people’s hands and out of their homes. I really don’t… I just hope that they don’t accelerate this. I mean, the things that they’re trying to do, the policies they’re trying to implement, ultimately lay the groundwork to actually knock on somebody’s door and demand that they give guns. I cannot tell you how many people I’ve talked to the last week or two all over the country because I’ve been all over the country and they say, well, there’s no way I’m going to give up any of my guns. I fear for a country that has the authoritarianism of the left. And the attempt to disarm Americans, law-abiding Americans, by the authoritarians and the left. I fear for what will happen.

STARNES: On the Patriot Mobile Newsmaker Line. Our good friend, Congressman Andy Biggs from Arizona, former chairman of the House Freedom Caucus. You know, Congressman, last week, one of the most horrifying things I have seen happen in a while happened at the airport in Nashville. Former Trump adviser Peter Navarro, who was, what, 72 years old, Harvard educated. He was indicted on contempt of Congress charges and, Congressman, they put him in handcuffs. They put him in leg irons and they frog-marched him out of the building and put him in a cell. This is incredibly disturbing. And all I would tell our listeners is to remember how they handled Eric Holder, who was brought up on contempt of Congress charges. He was not hogtied and hauled into federal court.

BIGGS: Yeah. I was so disturbed by seeing that because it is such an overreach. I mean, here’s a guy who lives in D.C. very easy to go to him, say, we need you to surrender because a grand jury indictment has been handed down against you. He gets it. He’s a lawyer. He would have gone in and voluntarily surrendered himself. But what that was done was meant to intimidate and basically show this out-of-control, woke, federal police apparatus. And it’s going to get worse, I’m afraid. And I thought of the Harriet Miers incident where she was held in contempt. But, you know, they worked it all out ultimately. And you mentioned Eric Holder. Eric Holder never ever would have been brought before a grand jury. Why? Because he was the guy in control of it. So they have weaponized the DOJ. They’ve weaponized the attorney general’s office. All of this is going and every institution that we have in the United States has been weaponized by the left. And that is a very dangerous thing because it’s going to undermine the very freedoms that we enjoy in a constitutional republic.

STARNES: Well said. Alright, Congressman, we’re going to leave it there. Always appreciate your great insight. Thanks for coming on the show.