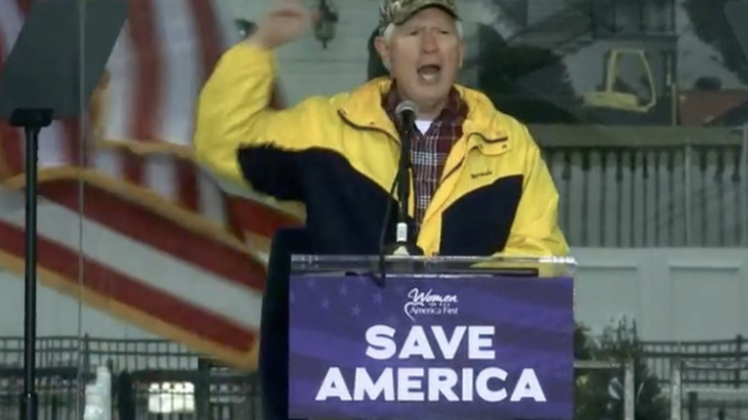 Democrats have declared war on Rep. Mo Brooks (R-AL), accusing him of inciting the riot at the U.S. Capitol. Brooks was a guest on the Todd Starnes Radio Show today. He said he is not sure if Republican leadership is going to defend him or any other pro-Trump lawmakers.

STARNES: Congressman, they’re targeting Don Junior, Rudy Giuliani, yourself and our good friend Congressman Louie Gohmert. And I’m very curious to know, and I know our listeners – they’re gonna want to know this is well, is the Republican Party standing alongside of you?

REP. BROOKS: That’s an open question. I just got through putting together a 10 page document that goes from A to Z on what transpired and absolutely destroys the flimsy argument the false propaganda of the Socialist Democrats and the fake news media concerning my speech on the Ellipse at the request of the White House this past Wednesday.

They want to act as if that inspired violence. Absolutely not. I’ve been to lots of rallies where I gave a very similar speech about the greatness of America and why we’re the greatest nation in world history. What adds up to that?

I’ve also seen Trump rallies on TV. I’ve never been to one before and in no instance, in either of those two circumstances have I ever heard of violence resulting either from the speeches that I gave or the because of the trump rallies that I have to see on TV?

So this is all brand new to me. But there are some militant groups and unfortunately got involved on Wednesday saw way to exploit the Trump rally and turn it into a violent thing instead of a peaceful one that otherwise would have enabled American citizens to exercise their freedom of speech. Freedom of association rights That, of course, include protesting at the United States Capitol, which, by the way, happens on a regular basis. If you’ve been up here,

STARNES: Congressman. And just to clarify, um, has has Republican House leadership. Have they reached out to you? Have they given you any words of encouragement? What have they What have they said?

REP. BROOKS: Well, they haven’t said anything. I‘ve tried to reach Kevin McCarthy, did not return my phone call, tried to reach him yesterday, and then also today, my staff doing the same thing. So I’m a little bit baffled. But in the next 20 or 30 minutes, we’re going to send that rebuttal to every Republican member of the United States House of Representatives so they will know what the truth is.