Rudy: Thousands and Thousands of Ballots Stuffed in Garbage Cans 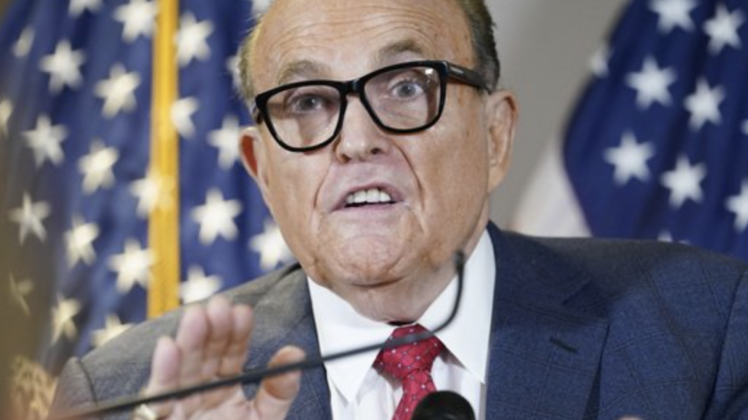 Former New York City Mayor Rudy Giuliani told reporters today that he has sworn affidavits from individuals who saw a truck loaded with trash cans pull up to a voting center in Detroit. Inside the cans were thousands and thousands of ballots, he alleges.

Following is a transcript of Rudy’s remarks.

CLICK HERE TO READ TODD’S EXPLOSIVE BOOK: “CULTURE JIHAD: HOW TO STOP THE LEFT FROM KILLING A NATION.”

“There are many more affidavits here. I’d like to read them all to you, but I don’t have the time. You should have had the time and energy to go look for them. That’s your job, like it’s my job to defend the president and to represent the president. It’s your job to read these things and not falsely report that there’s no evidence. Do you know how many affidavits we have in the Michigan case? 220 affidavits. They’re not all public, but eight of them are. Four affiants here, those are people who give affidavits, report an incident that, under any other circumstances, would have been on the front page of all your newspapers if it didn’t involve the hatred that you have, irrational, pathological hatred that you have for the president. What they swear to is that, at 4:30 in the morning, a truck pulled up to the Detroit center where they were counting.

“A truck pulled up to the Detroit center where they were counting ballots. The people thought it was food, so they all ran to the truck. Wasn’t food. It was thousands and thousands of ballots and the ballots were in garbage cans, they were in paper bags, they were in cardboard boxes, and they were taken into the center. They were put on a number of tables. At that time, they thought all the Republican inspectors had left, all but two had and an employee of Dominion who we will address a little bit later, Dominion.

WOW! Affidavits support that at 4:30am a truck pulled up to the Detroit center where they were counting ballots & dropped an estimated 60,000 to 100,000 ballots that voted for @JoeBiden only with NO down-ticket voting! @RudyGiuliani @RSBNetwork pic.twitter.com/AKcKylRRDm

Here’s what they jointly swear to, that every ballot that they could see, everything they could hear, these were ballots for Biden. When they saw a ballot, these were ballots only for Biden, meaning there was no down-ticket. Just Biden. Many of them didn’t have anything on the outer envelope because these ballots were produced very quickly, very swiftly and there are estimated to be a minimum of 50,000, maximum of 100,000. Many of them were triple-counted, which means they were put into the counting machine this way. Once, twice, three times. I didn’t see that. I don’t know that but for the fact that three American citizens are willing to swear to it. We’re not going to let them go to court and do that? We’re going to let this election go by when there are in this case 60 witnesses that can prove what I’m saying to you and other acts of fraud in Michigan? I mean what’s happened to this country if we’re going to let that happen? What happened to this country if we’re going to cover that up? We let Al Gore carry on an election dispute longer than this one has been going on for one state and for chads. This happened in Pennsylvania, it happened in Michigan, Michigan probably right now, if I count up the B, just one case alone, Trump v. Benson, a case that we dismissed today because that case was attempting to get the Wayne County Board of Supervisors to de-certify. Well they did. They de-certified. That case has 100 affidavits and 100 affidavits show essentially what I’ve talked to you about. Counting ballots improperly, counting them three and four times, having people vote three and four times, changing and backdating ballots to the point of at least 300,000 illegitimate ballots that we can specifically identify. The margin in Michigan is 146,121 and these ballots were all cast basically in Detroit that Biden won 80-20. So you see it changes the result of the election in Michigan if you take out Wayne County. So it’s a very significant case. That is being raised in the case of Costantino v. The City of Detroit. Not by us, but by an individual plaintiff. We are helping and assisting in that case however and you can find all the affidavits that you want filed in that case. You can find out they’re not just allegations, they’re allegations supported by sworn testimony which is a lot better than Joe Biden has ever done on anything. He doesn’t answer questions, much less give you sworn affidavits.”