SCOTUS LEAK: Was It a Liberal Justice’s Clerk? 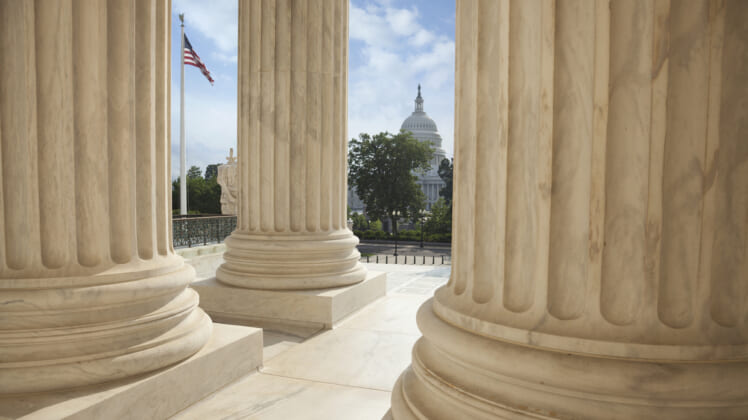 Following the unprecedented leak of a Supreme Court first draft opinion that would overturn Roe v. Wade, many are pointing to a possible liberal clerk as the culprit.

The 98-page document was published in full by Politico Monday night.

Constitutional law expert Alan Dershowitz told Newsmax he believes it was a “law clerk who was very strongly opposed to reversing Roe v. Wade – seeking to make it public now so that pressure could be put on the Supreme Court, either by an act of Congress to pack the court, or an act of Congress making a federal legislative right of every woman to have an abortion based on the Commerce Clause.”

“I’m going with a clerk for a liberal justice leaked to pressure someone to break off and flip,” Curtis Houck, NewsBusters managing editor, tweeted.

BREAKING: Barricades Being Erected in Front of Supreme Court

I'm going with a clerk for a liberal justice leaked to pressure someone to break off and flip.

No doubt it’s a liberal clerk, or justice, and nothing will happen https://t.co/puzo2smzLl

"No draft decision in the modern history of the court has been disclosed publicly while a case was still pending."

So a liberal clerk overturned centuries of constitutional tradition to put public pressure on court to uphold Roe.

They have to axe it now.https://t.co/B0USdloPQe

An investigation should be opened to find out what liberal clerk leaked the SCOTUS decision.

The SCOTUS blog, a respected publication on the Supreme Court, called the leak “the gravest, most unforgivable sin.”