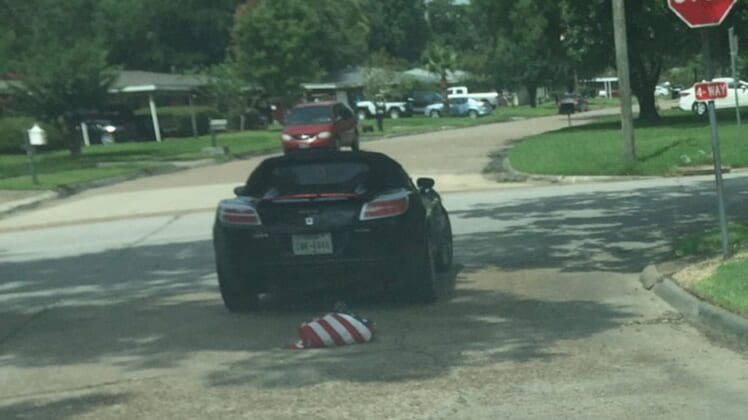 An American patriot was brutally attacked on the Fourth of July by a motorist who was dragging the American flag down Martin Luther King, Jr. Drive in Orange, Texas.

Brandon Scott was sucker punched when he stopped to alert the driver in a Home Depot parking lot. He suffered a broken jaw and is recovering from surgery.

A spokesman for the Orange Police Department tells the Todd Starnes Radio Show that video surveillance shows Mr. Scott being punched by the suspect. The victim’s four-year-old son was inside the car.

The police department confirms a criminal warrant for aggravated assault has been issued for a Houston man. Until the man is officially charged we will not be releasing his name.

However, police confirm that prior to the incident the suspect had posted on social media of his intention to desecrate the flag.

“I’m here in Orange Tx. All week and I’m dragging this coward ass flag if you don’t like it come get it, I’m not hard to find,” the suspect wrote.

Mr. Scott’s jaw is wired shut and he is unable to talk. However, he agreed to a written interview with the Todd Starnes Radio Show.

“Honestly, I didn’t notice it was a flag until I alerted the driver that he was dragging something and I flagged him down to assist in removing it,” Mr. Scott tells me.

“I squatted down to help remove and noticed it was an American flag and a hat, tied together, still leaning down I turned to inform him it was a flag, and that’s when he blind side punched me and broke my jaw,” he said.

Radio station KOGT reports the suspect feared for his life and was protecting his property. Click here to read their reporting.

However, the police department tells me that video surveillance backs up Mr. Scott’s version of the incident.

Television station KFDM says many of the social media postings about the incident have been racial. The suspect is black, the victim is white.

There’s no doubt that the suspect desecrated the American flag, but police say they cannot charge the man with any crime because of federal law.

“In a general sense, I don’t condone the desecration of the American flag in any fashion, but he has every right to do so if he chooses,” Mr. Scott told me. “That was not why I pulled over to assist.”

As you might imagine, citizens across Texas are outraged by the flag desecration.

“If he does not like the United States, he can get out. I’ll help him pack and book his one way flight to North Korea,” wrote one reader.

“Plain and simple and the fact that this happened on the “4th of JULY”. This guy is a piece of crap and wanted trouble. Why else drag a flag behind your vehicle especially in this part of Texas,” wrote another.

“If you don’t love this country and respect what that flag stands for you are welcome to GET OUT,” another patriot wrote.