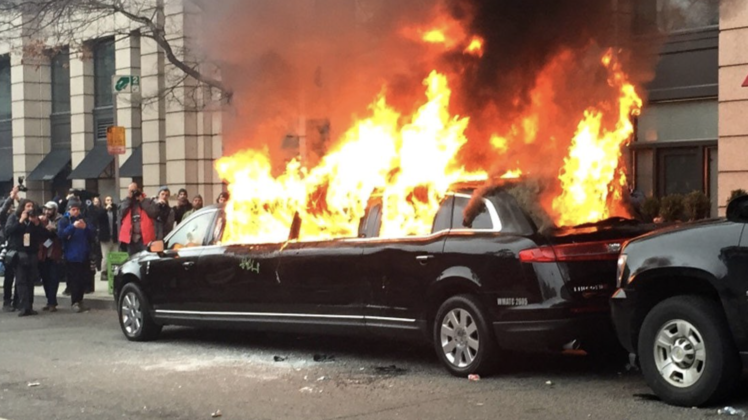 OPINION: The Todd Starnes Show was one of the first to condemn the storming of the U.S. Capitol by a mob of violent thugs.

We were also among the first to point out that there were two different events that happened on that day. There was a peaceful protest led by President Trump and then there was an anarchist mob at the Capitol.

Those involved in the Capitol attack should face the stiffest penalty under the law. And so should lawmakers who ignored warnings from law enforcement that a mob was on the way.

Meanwhile, the Mainstream Media is pushing a narrative that life was “rainbows and unicorns” during the Trump inauguration. That is simply not true.

This is what the “peaceful transition of power” looked like when President Trump took office. Anti-Trump mobs turned Washington, D.C. into a war zone. More than 200 people were arrested.

Over the past four years Democrat leaders used their platforms to sow seeds of unrest and question the legitimacy of the Trump presidency.

An untold number of lawmakers urged their supporters to hunt down Trump supporters and “absolutely harass” them in the streets. And they did.

Just take a look at what DC looked like during President Trump’s inauguration.

I’m not sure who needs a reminder, but here’s DC on the day Trump was inaugurated. pic.twitter.com/WAmFtb6Cvr

Right now. Police forcing protesters back on K Street. The pepper spray is out. @wusa9 pic.twitter.com/5E4I1srjfg

Protesters just set a fire at 14 and K St NW. Chanting "no justice, no peace." Band playing in the background. @wusa9 pic.twitter.com/n1tfUM0Isa

Protestors in DC smashed the windows of my hired SUV & many other cars. I was working in-studio & am ok, but my driver is a bit rattled.