Todd Starnes: If Only Hillary Had Read a Passage From Juanita Broaddrick’s Book 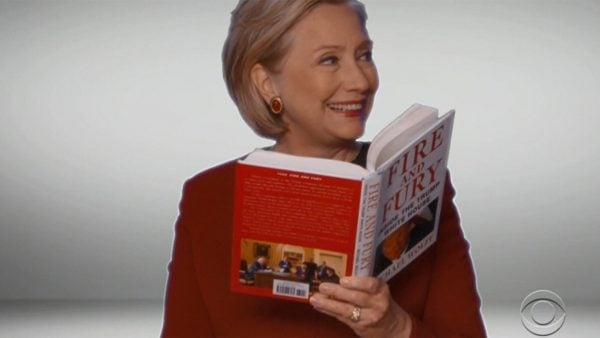 Hillary Clinton emerged from the woods of Chappaqua, New York to crack a joke at President Trump’s expense during Sunday night’s Grammy Awards.

On the hunt for a GRAMMY Award of his own, James Corden auditions celebrities for the spoken word version of Michael Wolff’s “Fire and Fury.” pic.twitter.com/SjTobAbv2N

The crowd inside Madison Square Garden erupted in deafening cheers when Hillary made a surprise appearance — reading a passage about President Trump’s love for McDonald’s.

Donald Trump, Jr. had perhaps the best retort of the night – tweeting:

“Getting to read a #fakenews book excerpt at the Grammys seems like a great consolation prize for losing the presidency.”

“Don’t ruin great music with trash. Some of us love music without the politics thrown in it,” Haley tweeted.

It’s too bad Hillary did not read a few passages from Juanita Broaddrick’s book, “You’d Better Put Some Ice On That: How I Survived Being Raped by Bill Clinton.”

Now, that would’ve been interesting indeed.