Trump Had THIS to Say About Meghan Markle After Oprah Interview 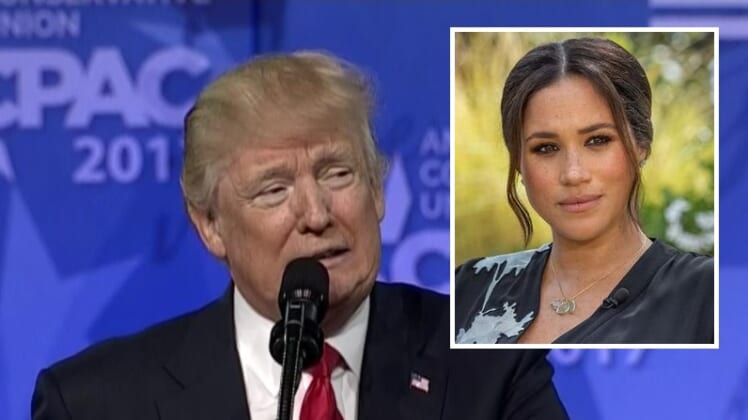 “I wish a lot of luck to Harry, because he’s gonna need it.” former President Trump previously said of Meghan Markle

Although Trump declined to publicly weigh in on the interview with Prince Harry citing the treatment of Piers Morgan, an ex-advisor told Steve Bannon’s “War Room” podcast what his private thoughts were.

“She’s no good … I said it and now everybody is seeing it,” Jason Miller said Trump told him.

Miller said Trump added: “You realize if you say anything negative about Meghan Markle you get canceled, look at Piers.”

Trump allegedly told him he was on “team Piers.”

“Piers Morgan is the best, he’s the greatest, and they went and tried to cancel him simply because he criticized Meghan Markle,” Miller said Trump told him.

The comments come as Markle is reportedly networking with senior Democrats to weigh a run for president in 2024.

Sources told the Mail that Markle, 39, is looking at jumping in if Biden, who will be 82, decides not to run. Meanwhile, Trump has not declared if he will run but hinted at it during his CPAC address.

Trump has previously traded barbs with Markle, saying he was “not a fan” after the Duchess of Sussex hinted at supporting President Biden in the runup to the 2020 election.

“I would say this – and she probably has heard that – but I wish a lot of luck to Harry, because he’s gonna need it,” Trump said at the time.