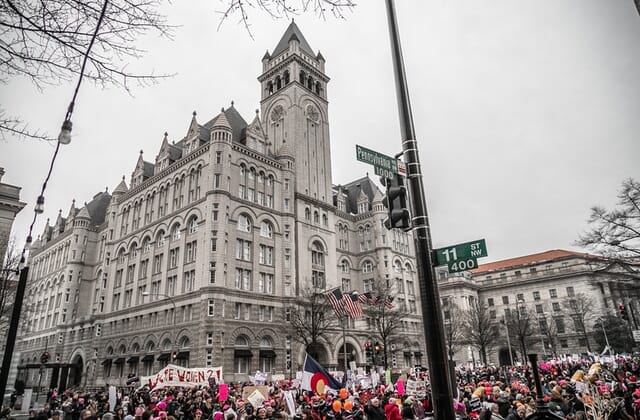 The Trump International Hotel in Washington, D.C. opened the month before former President Trump was elected in 2016 and now the stories of the last four years by former employees are being shared.

Bill Williamson, the executive chef of BLT Prime from February 2018 to March 2020, claimed food suppliers whom he had worked with the in the past “were suddenly sending him rotten produce and subpar cuts of meat and fish,” according to Washingtonian.

“I guarantee someone in that warehouse picking this product saw where it was going and was like, ‘Oh, f— it, give ’em this stuff,'” Williamson said.

Former executive chef Shawn Matijevich, who worked at BLT for part of 2017 and 2018, also claimed that a green supplier whom he used in the past stopped working with him, saying their “conscience” precluded them from servicing the hotel restaurant, Business Insider reports.

But despite vendors trying to blacklist the restaurant for being connected to the Republican leader, employees inside the hotel said they were paid and tipped better than ever before.

“People would literally come up to me and give me $100 bills and be like, ‘You must be the best bartender in the world if you work here!’” Michel Rivera, a former bartender at the lobby bar, told the D.C. outlet he pulled in more than $100,000 a year with tips, a high for his 25-year career.

While Trump is expected to announce a run for 2024, employees from the hotel worry that putting the experience on their resume could jeopardize their careers with anti-Trump sentiments.

One pro-Trump employee said he wore his uniform on the Metro and had fellow passengers harass him: “Shame on you! How can you work for a person like that? You’re a racist!”