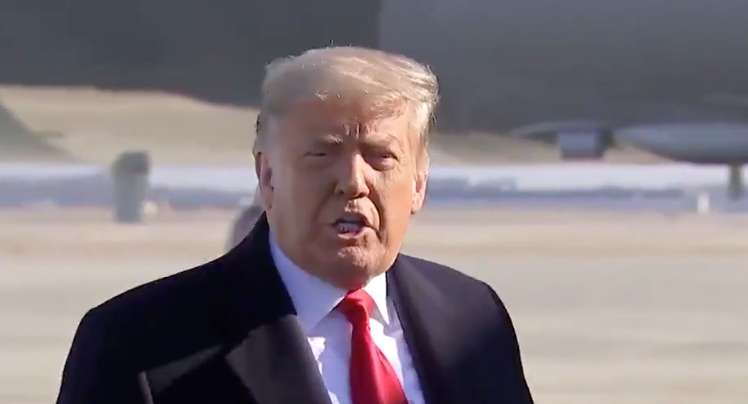 President Trump on Tuesday struck a defiant tone and said Big Tech companies made a big mistake when they cracked down on him and his supporters and went on to say Joe Biden and Democrats to be careful of what they wish for when it comes to the 25th Amendment.

TRUMP: IF YOU READ MY SPEECH, PEOPLE THOUGHT WHAT I SAID WAS TOTALLY APPROPRIATE

Trump spoke to a scrum of reporters at Andrews Air Force Base. He denied allegations that he ignited the riot at the Capitol and said Twitter and other tech companies overreached in their effort to snuff out his movement.

“I think that big tech is doing a horrible thing for our country and to our country, and I believe it’s going to be a catastrophic mistake for them,” he said.

Trump told reporters that he has been warning about Big Tech censorship for a long time. He also pointed out that the same Democrats railing against the riot at the Capitol cheered on riots over the summer.

“If you look at what other people have said, politicians at a high level, about the riots during the summer, the horrible riots in Portland and Seattle and various other places, that was a real problem, what they said.”

Jim Cramer, the CNBC host, said Monday that Trump’s ban on the platform could have dire consequences for the company.

Trump was headed to the Southern Border in Alamo, Texas. He addressed the media once again in the Lone Star State and called the tech crackdown a continuation of the “greatest witch hunt” in the country’s history.

He said that his administration has repeated for the past four years that it respects the U.S. and its traditions and the rule of law. He, once again called for calm.

Trump also mentioned the effort by House Democrats to get Vice President Mike Pence to invoke the 25th Amendment to remove him from office.

“The 25th Amendment is of zero risk to me but will come back to haunt Joe Biden and the Biden administration…Be careful what you wish for.”