Trump Vows to Fight to Save Pledge of Allegiance 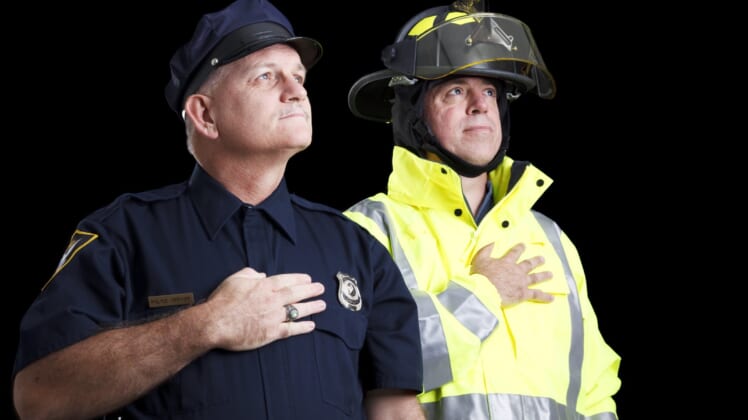 Police officer and fire fighter with their hands over their hearts as they say the Pledge of Allegiance.

Dozens of citizens in St. Louis Park, Minnesota showed up at City Hall on Monday night chanting, “USA, USA” and reciting the Pledge of Allegiance in defiance of city council leaders.

The Minnesota patriots turned out to urge the city council to reconsider a decision to stop reciting the pledge because it might offend newcomers to the community. The policy is expected to be implemented next week.

“We concluded that in order to create a more welcoming environment to a diverse community we’re going to forgo saying the Pledge of Allegiance before every meeting,” councilman Tim Brausen told the Star-Tribune.

The vote to assign the pledge to the dustbin of history was unanimous so it appears unlikely lawmakers will reverse the decision.

“We’ve had some racial equity initiatives going on in the city of St. Louis Park for a while where we’re trying to get more diverse communities and historically less engaged communities to come and participate in our public process,” Brausen told the newspaper. “Given the current Washington politics that are going on now, there’s a lot of people that are afraid of our government, and we worry about that.”

The fight to save the pledge has garnered the attention of President Trump, who issued a tweet in defense of the patriots in St. Louis Park.

“Outrage is growing in the Great State of Minnesota where our Patriots are now having to fight for the right to say the Pledge of Allegiance,” he wrote. “I will be fighting with you!”

The “culture jihadists” refer to a militant army made up of secularists, socialists and race agitators.

They are committed to finishing what President Barack Obama started when he promised to fundamentally change the nation.

That’s why I believe the left is so upset with President Trump – because they don’t want to make America great again. They want to destroy America so they can build a socialist utopia.

That’s why the left is advancing a dangerous narrative that our Founding Fathers were racists, our Founding Documents are racist and therefore the entire nation is racist.

On July 9 Beto O’Rourke told a group of immigrants in Nashville that the United States is rooted in racism.

“I know this from my home state, Texas, places that formed the Confederacy, that this country was founded on white supremacy. And every single institution and structure that we have in this country still reflects the legacy of slavery and segregation and Jim Crow and suppression, even in our democracy.”

The narrative being advanced by O’Rourke and Kaepernick and his fellow culture jihadists is that America is inherently a racist nation that is responsible for all of the world’s problems. And their argument is gaining traction.

It’s the same argument that was advanced at George Washington High School in San Francisco. The school board decided to cover up a fresco of our first president because he owned slaves. Lawmakers in Charlottesville, Virginia just used that argument to banish Thomas Jefferson Day.

It was the same argument used by culture jihadists in Philadelphia who successfully had a statue of Kate Smith removed from outside a sports venue because she once performed a song now considered to be racially offensive.

It’s the same argument used by leftists who successfully banned books like “Huckleberry Finn,” “To Kill a Mockingbird” and “Little House on the Prairie.”

And it is the same argument being used by leftists to ban conservatives from restaurants and justify attacking them in the streets.

Call to Arms for Patriots

I titled my book “Culture Jihad” because it is a call to arms for every freedom-loving American — Christians and Jews, straight and gay, black and white and brown.

We have a responsibility to stand up to the Orwellian tactics of the leftists and defend liberty. Otherwise, the culture jihadists will conquer the nation.

As for immigrants who find that America does not meet their standards of living, might I suggest a one-way plane ticket back to where ever you came from. Don’t let the door hit you where the good Lord split you.