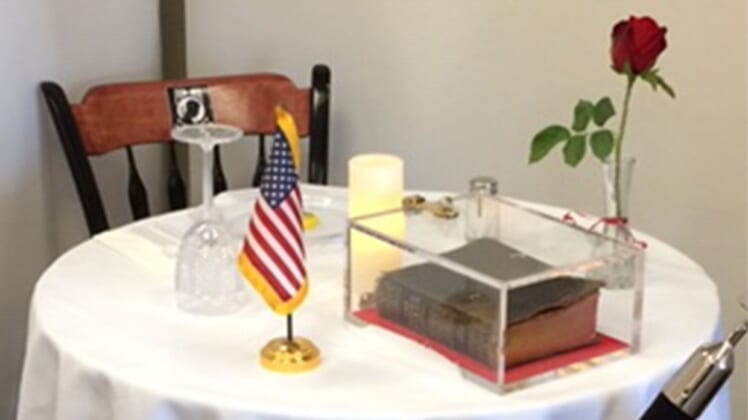 A Veterans Affairs hospital in New Hampshire is allowed to display a Bible on a POW/MIA Remembrance Table after a federal court dismissed a lawsuit against them Wednesday.

A local veteran, supported by the Military Religious Freedom Foundation (MRFF), filed the lawsuit in 2019 against the Manchester Veterans Affairs Medical Center (MVAMC), claiming the Bible put on display by the Northeast POW/MIA Network, a private organization, is a violation of the First Amendment’s prohibition on the “establishment of religion.”

Michael Berry, director of Military Affairs for First Liberty Institute, which represented the Northeast POW/MIA Network, celebrated the dismissal of the lawsuit Thursday.

“The Bible stays and our veterans win,” Berry said.

“Public officials across the nation must ignore the empty threats of anti-religion organizations using fear and intimidation to purge religious symbols from the public square,” he added. “First Liberty is honored to stand with the Northeast POW/MIA Network in its tireless efforts to honor and remember our nation’s heroes.”

The Department of Veterans Affairs updated its policy in July 2019 at First Liberty’s urging by “permitting religious literature, symbols and displays at VA facilities to protect religious liberty for Veterans and families while ensuring inclusivity and nondiscrimination” after First Liberty sent a letter urging the VA to issue such a clarification.

First Liberty said the Bible included in the display at the MVAMC was donated by former U.S. Army Air Corps Technical Sergeant (TSgt) Herman “Herk” Streitburger, of Bedford, NH, who was held captive in a German Prisoner of War camp during World War II.

Berry is a former Marine Corps judge, who was deployed to Afghanistan in 2008 and is currently a member of the Marine Corps Reserve. And he isn’t backing down in his defense of the VA display.

“If anyone tries to threaten this POW/MIA Remembrance Table, they’re going to have to go through us,” he added.