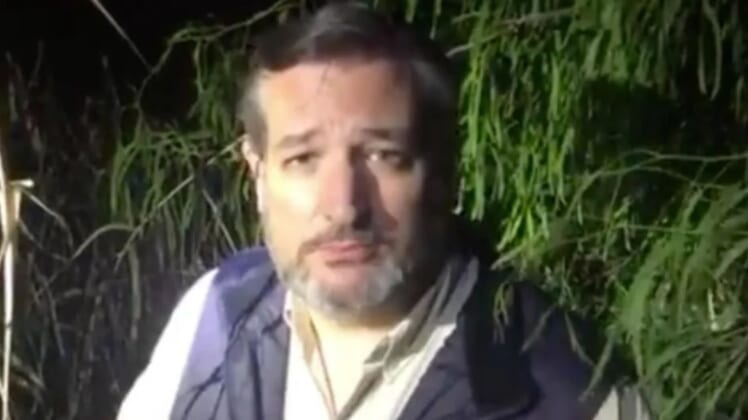 Sen. Ted Cruz (R-TX) posted video on Twitter after midnight Thursday where he encountered human traffickers and cartel members yelling at a Republican Senate delegation on the Southern border.

“We have been listening to and seeing cartel members, human traffickers right on the other side of the river, waving flashlights yelling and taunting Americans, taunting the Border Patrol,” Cruz said in a video.

“Because they know under the current policies of the Biden administration they can flood over here,” the GOP Senator added.

Cruz explained smugglers are getting paid $4-5,000 a person to smuggle them into the U.S., where the Biden administration releases them.

“There is a reason they don’t want the press there,” Cruz told reporters on Wednesday.

Sen. Susan Collins (R-ME) confirmed Friday she was on the tour, calling it a “crisis” at the border.

“I spent the last 3 hours with Border Patrol on night shift in McAllen, TX. 18 Senators learning about the huge influx, 3,000 people per day, including unaccompanied children, illegally entering.”

She added: “Border Patrol is overwhelmed, overworked, & discouraged by new policies. Agents took us through a dangerous path to the Rio Grande where we could hear the Cartel members taunting us across the river. Human trafficking, child abuse, & drug smuggling are rampant. This is a crisis.”

WATCH THE VIDEO FROM CRUZ BELOW: