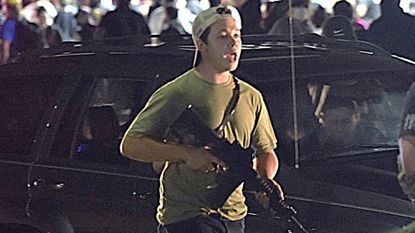 Kenosha teen Kyle Rittenhouse was charged with two felony counts of homicide and one count of attempted homicide. Rittenhouse says he was trying to defend himself during the riots in his town following the aftermath of the shooting of Jacob Blake last year.

The 18-year-old faces potential life in prison. And in such cases, legal defense fees add up quickly. As a result, some people are donating to his defense fund, including a police officer in Virginia that’s been on the force for 18 years.

That officer, Lt. William Kelly, donated only $25, but that small amount is costing him his job.

The Guardian leaked the information on the officer a few days ago. The data breach revealed Kelly’s $25 donation on Sept. 3, 2020. They connected the donation to his email address to figure out the identity of the donor.

The originally anonymous donation included the following message, according to the article:

“Keep your head up. You’ve done nothing wrong. Every rank and file police officer supports you. Don’t be discouraged by actions of the political class of law enforcement leadership.”

This report resulted in a lot of backlash and eventually led to the announcement that Kelly had been fired. Virginia news outlet WAVY reported on the story and posted the Norfolk City Manager Chip Filer’s statement on the matter:

“I have reviewed the results of the internal investigation involving Lt. William Kelly.  Chief Larry Boone and I have concluded Lt. Kelly’s actions are in violation of City and departmental policies. His egregious comments erode the trust between the Norfolk Police Department and those they are sworn to serve. The City of Norfolk has a standard of behavior for all employees, and we will hold staff accountable.“