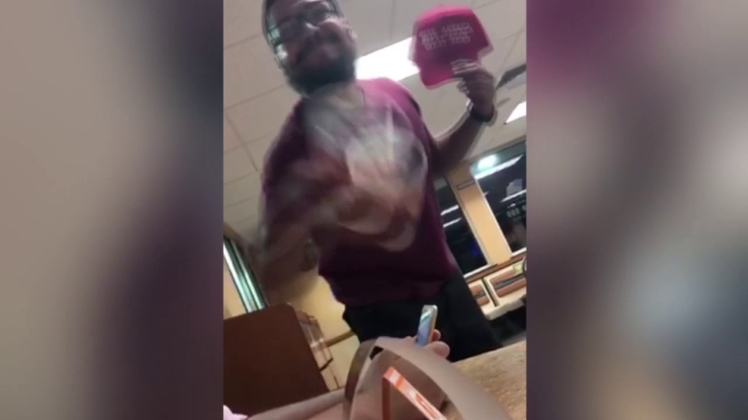 Hunter Richard and his friends were eating burgers when a grown man came over and ripped the iconic red hat off his head. The teen said some of his hair was torn from his scalp.

One of his friends videoed a portion of the attack when the menacing thug grabbed a beverage and threw it in Hunter’s face.

As he stormed off the attacker continued to hurl obscenities.

Hunter told our Fox television affiliate in San Antonio that the attack was unprovoked.

Police are investigating the incident, but the attacker has not been positively identified, television station KABB reports.

The owner of Rumble, a local bar, posted a message on Facebook acknowledging that one of their part-time employees was “captured on cell phone video assaulting another person at a local eatery. The assault took place, presumably, because this employee did not agree with the other individuals political stance.”

“We have since terminated this employee, as his actions go against everything that this establishment stands for,” the statement read.

So went out for a 2am snack and my friend (wearing a MAGA hat) had his hat stolen and a drink thrown in his face (and mine, you can see my arms on the left of the video) pic.twitter.com/B3QjBFIxPk

I told you this was going to happen, folks. I told you that Conservative were going to be hunted and attacked by low-life, leftwing predators.

I blame the Mainstream Media and Maxine Waters for this debauchery. Their rhetoric has led to a 16-year-old boy being brutally attacked.

But I doubt that will satisfy their bloodlust.