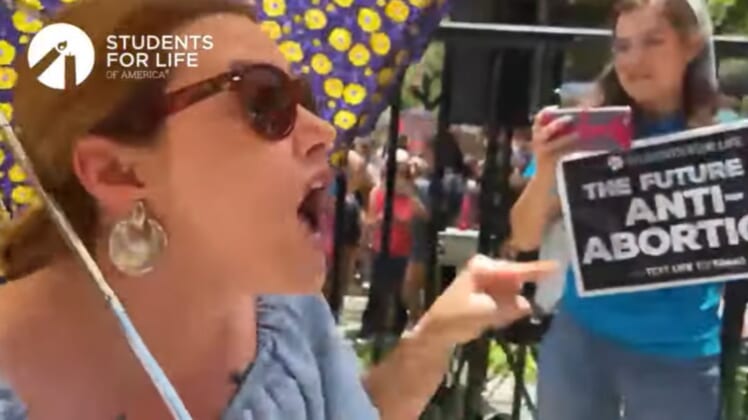 An outraged, pro-abortion woman confronted Students for Life (SFL) outside the Texas State Capitol as anti-abortion activists were celebrating the passage of a new heartbeat bill Saturday.

Texas Gov. Greg Abbott signed the Texas Heartbeat Law May 19 and over the weekend Planned Parenthood, the largest abortion provider in the nation, organized a protest opposite peaceful pro-lifers in Austin.

An angry woman started screaming in the face of Sarah Zarr, Texas and Southern manager for SFL/SFL Action.

“You’re a murderer!” she repeatedly yelled in a profanity-laced rant.

WATCH THE VIDEO OF THE CONFRONTATION BELOW:

“We frequently encounter emotional abortion supporters,” Zarr said. “Many of whom have likely been hurt by abortion experiences in their own lives. We pray for them to find peace and to demonstrate mutual respect for us as we do for them.”

The heated rhetoric comes as the Supreme Court is set to hear one of the most important abortion cases since Planned Parenthood v. Casey.

“We know that the future is anti-abortion,” Zarr added. “We envision that future in everything we do, and work today the day when every human life is celebrated both inside and outside the womb.”