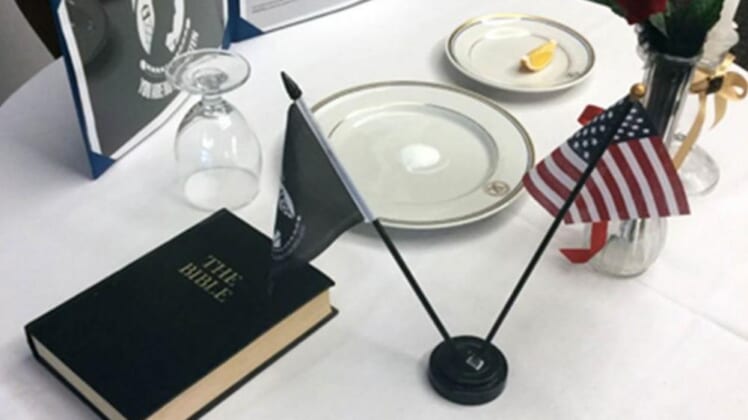 The commander at F.E. Warren Air Force Base is defending her decision to remove a Bible from a POW-MIA table and replace it with a generic “book of faith.”

Col. Stacy Jo Huser, the 90th Missile Wing commander, tells the Todd Starnes Radio Show that the Bible was removed to insure “the religious and non-religious feel included and cared for.”

The Bible was removed following complaints from the Military Religious Freedom Foundation.

The head of the foundation, Mikey Weinstein, wrote in the HuffPost that he is dedicated to fighting “virulent religious oppression” carried out by “incredibly well-funded gangs of fundamentalist Christian monsters who terrorize their fellow Americans by forcing their weaponized and twisted version of Christianity upon their helpless subordinates in our nation’s armed forces.”

The MRFF alleges that as many as 36 unnamed clients at the Air Force base in Wyoming have complained about the inclusion of the Bible on the table honoring prisoners of war and missing comrades.

“Taking care of our Airmen is a top priority for the 90th Missile Wing and its leaders,” Col. Huser told me in a statement. “To drive that point home, one of our focus areas on F.E. Warren Air Force Base is increasing the sense of belonging for all our Airmen; a large part of that effort is ensuring the religious and non-religious feel included and cared for.”

It did not seem to matter that the table traditionally includes a Holy Bible to represent “faith in a higher power and the pledge to our country, founded as one nation under God.”

Col. Huser tells me the Bible will be replaced with “a ‘book of faith’ containing spiritual writings and prayers from the five DoD Chaplain appointed faith groups and a sixth set of blank pages to represent those who find solace by other means.”

“No matter an Airman’s religious or non-religious beliefs, it is crucial for all to know we are an equally valued part of the same team vital to our mission’s success,” the commander said.

Let’s cut to the chase – President Trump needs to immediately intervene and put a stop to these ugly attacks from the Military Religious Freedom Foundation.