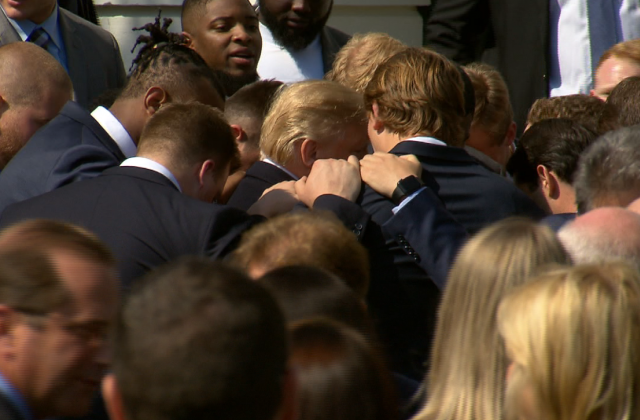 The Alabama Crimson Tide paid a visit to the White House the other day and it turned out to be one of those uniquely American moments.

“Coach Saban addressed it and just said, ‘Hey, we’re doing this regardless of your political thoughts,” offensive lineman Ross Pierschbacher told the Crimson White. “‘We’re going, just to celebrate this team. It’s an honor. And just to be able to say that you’ve gone to the White House is something that you can cherish forever.’ So that was basically the extent of that.”

And that’s exactly what happened. The team captains presented President Trump with a jersey (No. 17) that had his name printed on the back.

“It’s an incredible honor for us to be invited to the White House,” running back Damien Harris told the Washington Post. “It’s something that comes with being national champions, so we’re definitely thankful for the opportunity.”

It was an all-around class act — a reminder of a time when football was about the sportsmanship and not making a political statement.

But something else happened during that ceremony — something that has blessed hearts around the nation.

On the flight to Washington, D.C., punter JK Scott was listening to a worship song — when he felt compelled to pray for President Trump.

“God loves President Trump,” the 22-year-old punter said Wednesday on the Todd Starnes Radio Show. “The Lord laid on my heart to pray for him.”

And that’s exactly what JK did.

Click here to listen to Todd’s radio interview with JK.

So it was that President Trump stood on the White House lawn surrounded by a mountain of young men dressed in suits, black men and white men, their hands on each other’s backs — interceding on behalf of their president.

“Those (were) all my teammates. As soon as President Trump gave us permission, we all laid hands on him and we gathered around and we all started praying,” he said.

“The Lord wants to give him some peace,” JK said.

Like I said, it was a uniquely American moment.

What a cool moment! .@AlabamaFTBL JK Scott asked @POTUS if he could pray for him and his staff. Video below shows President Trump and Bama players praying after the Tide’s @WhiteHouse visit! @WBRCnews @BarrettSallee pic.twitter.com/tE4hj4k38l