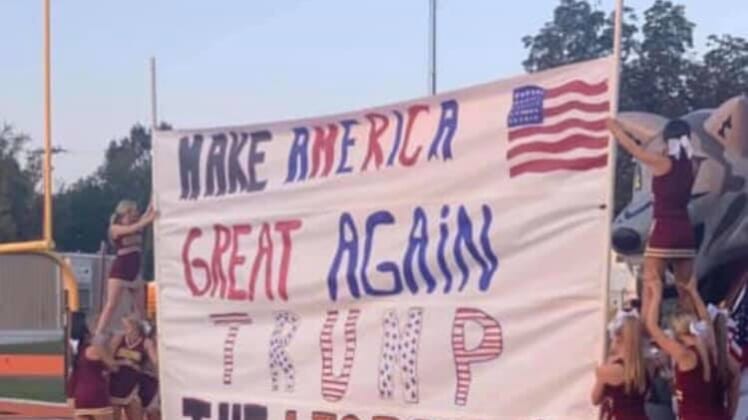 Over the weekend I told you about a group of high school cheerleaders in North Carolina who were targeted because they were photographed with a pro-Trump banner.

Now comes word of another group of cheerleaders under investigation in Arkansas. And if you read my new book, “Culture Jihad: How to Stop the Left From Killing a Nation,” you will understand why leftists are attacking our kids.

It was a clever play on words directed at their opponents on the football field, but critics say the sign is inappropriate.

“We are all entitled to our politics of choice, but not to using public entities to advance our politics,” Arkansas State Sen. Joyce Elliott (D) wrote on Twitter.

Television station KATV reports the matter has been turned over to the Arkansas Athletics Association per their rules and regulations.” .

If this is a public school, this is totally inappropriate. If it’s a private school, it’s poor judgment. We are all entitled to our politics of choice but not to using public entities to advance our politics. pic.twitter.com/sOUrapPIkT

Television station KXNW was provided a statement from the school district:

“The Lake Hamilton School District believes that all school activities should be conducted in an environment where good sportsmanship and respect are shown. The banner displayed at the football game this past Friday was not intended to make a political statement or endorsement. The district has taken steps to ensure that all future banners do not mention or reference political or controversial issues.”

What exactly is political or controversial about wanting to make America great again?