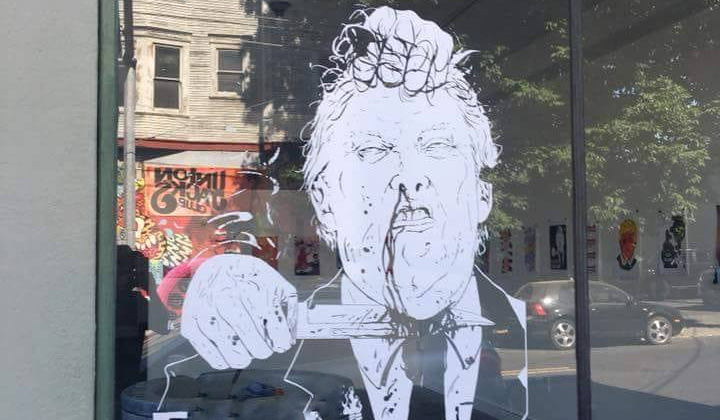 The Left is obsessed with profane art work that depicts the assassination of President Trump. The latest incident involves an installation at One Grand Gallery based in Portland, Oregon.

The window painting depicted a graphic image of President Trump being decapitated. The image shows the President’s head pulled back with a bloody knife to his throat.

The painting was part of a profane exhibit about the president titled, “F*** You, Mr. President.”

The founder of the gallery, who declined to be named, said he eventually decided to remove the painting after receiving death threats.

“People that are responding, are responding with such anger and violence,” the founder told Fox 12. “People want the gallery to go up in flames with my family.”

The man told Fox 12 in Portland that he was perplexed why a violent painting would conjure up such violent reactions.

In 2017 comedian Kathy Griffin posed for a photo shoot holding President Trump’s severed head. She became an icon among the Hollywood elites and the far-leftists.

Among those outraged by the exhibit was Portland-based talk show host Lars Larson.

“Some Lefty is going to make that kind of threat, which constitutes a crime, to make somebody fear for their life or safety or those around them,” Larson said on the Todd Starnes Radio Show. “And that conservative person, who is being assaulted merely because they support a particular person who is the President of the United States today, is going to act to protect themselves. Somebody is going to get hurt or killed, I believe that is probably likely.”

All that to say – this obsession with killing President Trump has to stop.

“Not that I’m a Trump supporter but that’s not the way to show it, and that post just conveys the wrong message,” one critic wrote on Facebook. “You’re encouraging violence and even murder of a United States president.”

So if it’s not too much to ask, perhaps the Leftists can stop behaving like Islamic Radical wannabes.

The One Grand art gallery in Portland has taken down an illustration depicting a knife to the throat of @POTUS @realDonaldTrump after receiving “threats”. We just spoke with the gallery founder who put it up — told me “People want the gallery to go up in flames with my family” pic.twitter.com/qw53aI8b9m