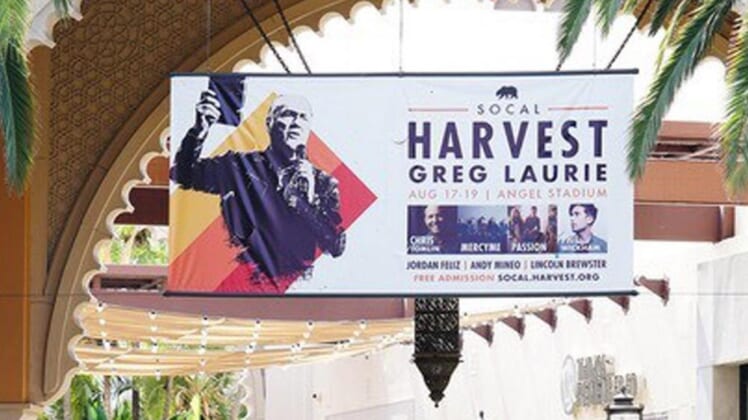 Billboards depicting evangelist Greg Laurie holding a Bible were removed from a popular outdoor mall in Southern California after numerous complaints and at least one “serious threat.”

“They said, ‘We’ve had some people complain about the Bible – would you consider changing the art?'” Laurie, the pastor of Harvest Christian Fellowship, said on the Todd Starnes Radio Show.

The billboards were supposed to promote the upcoming SoCal Harvest Crusade – expected to draw tens of thousands of people to Angel Stadium, CBN News first reported.

The promotional displays featured Laurie holding a generic black book along with photographs of MercyMe, Phil Wickham and other Christian musicians.

“Basically people were offended not just by the Bible they are offended by someone holding up a black book,” Laurie said. “Without apology, it was the Bible.”

The management of Fashion Island declined to tell the Todd Starnes Radio Show why they took down the billboards, but the contract between Harvest Crusade and the shopping mall includes a clause about the right not to display any materials that could be construed as “vulgar or offensive.”

“There was nothing overtly religious about it,” Harvest executive director John Collins told CBN News.

After the initial complaint, the Christian organization revised the advertisements to include only the word “Harvest” with the dates of the event.

“Then they came back and said they just wanted the ads completely removed and they refunded us,” he said.

I reached out to management at Fashion Island but they did not return my calls.

“We’re certainly not upset with The Irvine Company. Obviously they’re catching heat for allowing us to run these ads. We feel it is just unfortunate that people are complaining,” Collins told CBN News. “It’s sad that our culture is at this degree of intolerance…There’s such intolerance against Christianity that we aren’t allowed to state that or to publicly advertise this event. That’s amazing.”

Fashion Island broke a legal and binding contract with a Christian organization. That is simply not acceptable and there must be some sort of response from people of faith in Southern California.

This is nothing but an attempt to silence people of the Christian faith. But as I wrote in my latest book, “The Deplorables’ Guide to Making America Great Again,” we must not be silent and we must not stand down.