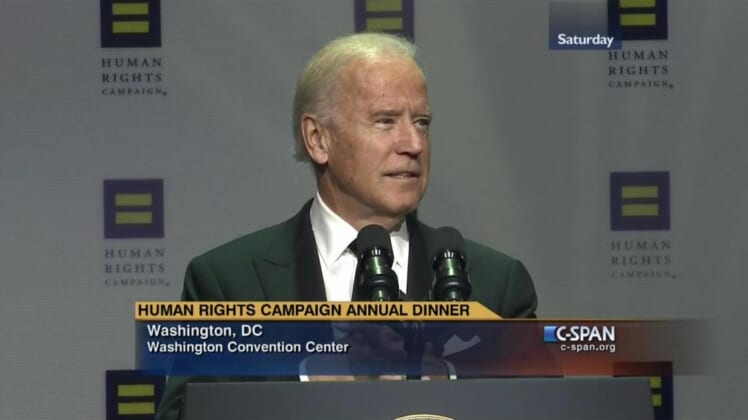 “These forces of intolerance remain determined to undermine and roll back the progress you all have made,” the vice president snarled. “This time they – not you – have an ally in the White House. This time they have an ally.”

And then the vice president unloaded on the “Make America Great Again” crowd.

“They are a small percentage of the American people – virulent people – some of them the dregs of society,” he declared to applause from his adoring fans.

“Instead of using the full might of the Executive Branch to secure justice, dignity, safety for all, the president uses the White House as a literal, literal bully pulpit – callously exerting his power over those who have little or none,” Biden said.

I’ve said many times on my radio program that Democrats and their minions hate President Trump’s supporters more than they hate the president.

They despise our traditional American values – our way of life. They hate concepts like God and Country. They loathe church and Sunday school. They reject traditional marriage. They detest law and order.

That’s why President Obama promised to fundamentally transform America. That’s why his administration never truly embraced the idea that we are an exceptional nation.

That’s why Obama mocked Rust Belt voters in a speech to San Francisco supporters. He infamously said they cling to their guns and their religion. He called them bitter.

It’s not that much of a stretch to imagine that Clinton and Obama were giving their followers silent permission to engage in political warfare with Conservatives. After all, if someone is irredeemable, they must be beyond redemption. In other words, they get what they deserve.

That’s why so many of Trump’s supporters were left bloodied and beaten in the streets. That’s why pro-Trump teenagers have been attacked in restaurants and classrooms for wearing “Make America Great Again” hats.

That’s why stars of stage and screen – musicians – have used their bully pulpits to call for the assassination of the president.

So I’m not all that surprised that a low-class, foul-mouthed political hack like Joe Biden called all of us flag-waving patriots a bunch of virulent, dregs of society.

To be perfectly honest with you, I’d rather be a gun-toting, Bible-clinging, dreg of society than an unemployed, pajama boy liberal.