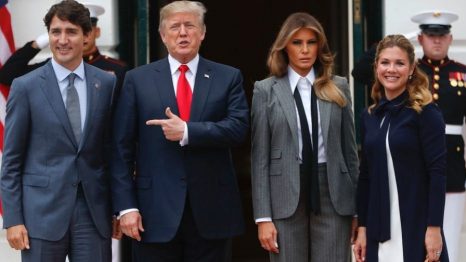 What in the name of Bullwinkle and Rocky is going on in Canada?

“We have received many awards throughout the whole world. However, unfortunately in Canada, our volunteering as a charitable religious organization is extremely difficult. Extremely,” the woman said.

Now, that’s true. Much like their brethren to the south – Canadian liberals loathe people of faith.

“That’s why in actuality, we cannot do free volunteering to help our neighbors in need as we truly desire. So that’s why we came here today, to ask you to also look into the policies that religious charitable organizations have in our legislation so that it can also be changed because maternal love is the love that is going to change the future of mankind,” she said. “So we’d like you to —“

Trudeau interrupted and got a bit snippy with the poor lady.

“We like to say people-kind, not necessarily mankind, more inclusive,” he declared.

Trudeau was in truth being dead serious, folks. Since he took office, the prime minister has been pushing a radical gender neutrality agenda.

Last year, lawmakers approved a law making it illegal to use the wrong gender pronouns.

Critics fear those who do not subscribe to progressive gender theory could be accused of hate crimes, the Daily Signal reported.

Trudeau heralded the legislation, tweeting, “Great news. Bill C-16 has passed the Senate – making it illegal to discriminate based on gender identity or expression. #LoveisLove.”

SUPPORT COMPANIES THAT SUPPORT CONSERVATIVE COMMENTARY! CHECK OUT OUR FRIENDS AT SUPERBEETS!

You might recall that our gender neutral friends north of the border recently passed a bill to make the national anthem more gender inclusive.

The Canadians took out the phrase” in all thy sons command” and replaced it with “in all of us command.”

The prime minister called it “another positive step towards gender equality.”

And you thought the sex and gender revolutionaries were radical on this side of the border – with their bans on daddy-daughter dances and Facebook’s 72 brand-spanking new genders.

I wonder if it’s too late to amend President Trump’s border security plans? Maybe we ought to consider building a wall on the northern border, too. Eh?