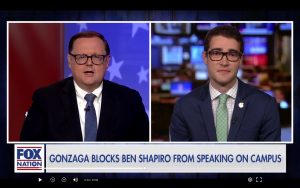 Communists are permitted to deliver speeches at Gonzaga University, but Jewish conservatives are not.

Are you tired of Conservatives and Christians being censored? If so, click here to get a free subscription to Todd’s weekly newsletter – a must-read for patriots!

“Mr. Shapiro’s appearances routinely draw protests that include extremely divisive and hateful speech and behavior which is offensive to many people,” Judy Garbuio wrote in a letter obtained by Campus Reform.

The university was also apparently concerned about protecting the fragile minds and sensitive psyches of leftists who populate the school’s campus.

“Gonzaga University is committed to the human dignity of every individual,” Garbuio wrote. “This is the core of our mission based on the teachings of Christ Jesus, and the foundations of the Society of Jesus. We stand in solidarity with vulnerable members of our community who may be targeted for discrimination, ridicule, or harassment by others.”

Young America’s Foundation accused Gonzaga of having a double standard when it comes to inviting speakers onto campus.

Last year, they hosted Angela Davis, a proud member of the Communist Party and supporter of an anti-Israel boycott movement.

“This decision by Gonzaga administrators amounts to institutional anti-semitism,” Brown said on Starnes Country. “It’s alarming to see the kind of attitude the school has clearly taken toward members of the Jewish community.”

It’s alarming to see that kind of attitude on American soil, folks.

Gonzaga either banned Mr. Shapiro because he is a conservative or because he’s a Jew. That’s downright despicable — and scary.