College Objects to 9/11 Poster Because of Muslim Bias 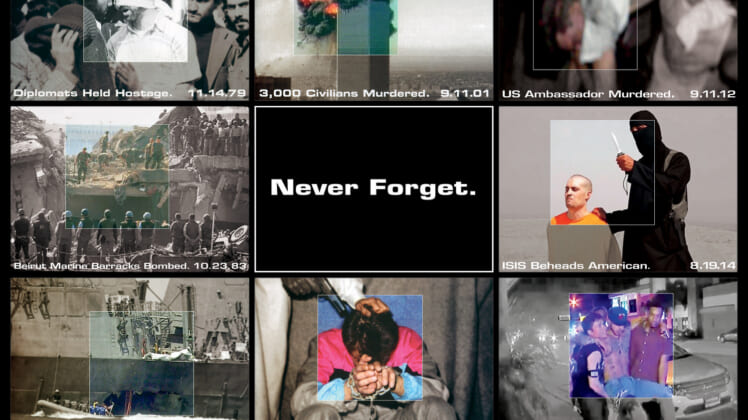 The “Bias Protocol Board” at Ripon College objected to a conservative group’s poster marking the September 11th terrorist attacks because it focused too much on one religious organization, one religious group and one religious identity: Islam.

The poster included images of the Pulse nightclub attack in Orlando, the bombing of the USS Cole and the Marine barracks in Beirut and the World Trade Center.

The cold, hard reality is that the attacks were perpetrated by Islamic radicals in the name of Allah. And that was a big problem for the school’s bias board.

“In associating that one religious identity with terrorist attacks which go back far before 9/11 and after 9/11 – creates for some students here an environment which they feel like they are not able to learn,” one administrator said in remarks reported by YAF.

Student leaders were summoned to a lengthy meeting where they had to explain themselves to college administrators.

“It seems like the only terrorist activities brought up in this poster are those done by extremist Islamic groups, and so if I’m Muslim on this campus, like, okay, it sends the message that all terrorism happens by Muslims,” an administrator told the conservatives.

YAF spokesman Spencer Brown tells me a student privately recorded the meeting — which is permissible under Wisconsin state law.

“There is nothing that this poster, in particular, adds to the conversation about 9/11 or about the politics of terrorism, or about national security or responses to it that could not be done easily and more constructively without it,” one administrator said in the meeting.

College officials stressed they never banned the students from posting the flyers.

“After receiving complaints from our students about the YAF Islamic extremism posters last year, College officials gave the Ripon College YAF student representatives suggestions as to how to have a discussion about 9/11 this year with our entire campus and community,” the college said in a statement posted on its Facebook page.

But I suspect those administrators strong-armed the conservative students into not posting the flyers.

“The administrators repeatedly said the posters are bias and that it would make Muslim students unable to learn,” Brown told me. “They tried to rip the poster apart and the students apart.”

In spite of the fierce protestations from college administrators, YAF tells me the students plan on posting the flyers.

“The YAF students plan to defy administrators’ threats that ‘If you put this poster out there… you’re going to get the same negative results’ and refuse to bow to the transparent attempts by the Bias Protocol Board to censor conservative students or sanitize the reality of 9/11,” Brown told me.

Americans must never forget what the Islamic radicals did to our nation on September 11th, 2001. It was a day when terrorists waged jihad on our soil — leaving thousands of our fellow countrymen dead or wounded.

We must never forget.