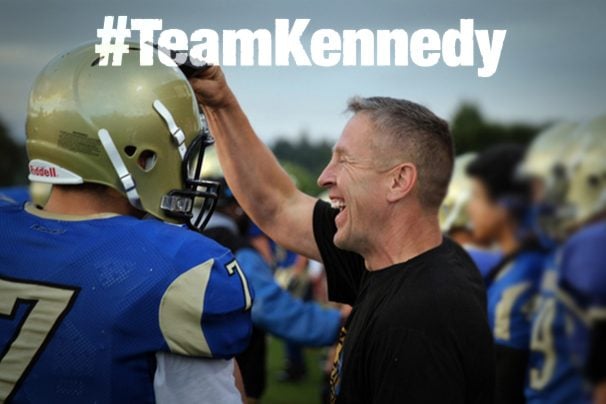 The U.S. Court of Appeals for the Ninth Circuit refused to hear the case of a Washington state high school football coach who was punished for taking a knee at the 50-yard line for a post-game prayer.

In August a three-judge panel of the Ninth Circuit ruled the Bremerton School District was justified in suspending Coach Joe Kennedy after he took a knee and prayed silently at midfield after football games.

“When Kennedy kneeled and prayed on the fifty-yard line immediately after games while in view of students and parents, he spoke as a public employee, not as a private citizen, and his speech therefore was constitutionally unprotected,” the 9th Circuit wrote.

“Coach Kennedy was forced to choose to between his faith and his job,” Berry said. “The Ninth Circuit Court told Coach Kennedy he did not have a prayer.”

If this decision is allowed to stand, “Jewish teachers can be fired for wearing a yarmulke in sight of students, Catholic teachers are at risk if they wear a crucifix,” Berry said.

First Liberty Institute warned that the court’s ruling will have a ripple effect across the country.

“Banning all coaches from praying just because they can be seen is wrong and contradicts the Constitution,” First Liberty Institute president Kelly Shackelford said.

Kennedy, who served as an assistant coach at Bremerton High School from 2008-2015, was ordered to refrain from bowing his head, taking a knee or doing anything that could be perceived as praying on public school property.

To be fair – it’s not like Coach Kennedy was conducting a Billy Graham Crusade at midfield. He would simply take a knee, bow his head, thank God for a good game and 30 seconds later – he went about his business.

“An objective student observer would see an influential supervisor do something no ordinary citizen could do – perform a Christian religious act on secured school property while surrounded by players – simply because he is a coach,” the judges wrote.

The evangelical Christian was suspended in 2015 when he defied school officials and continued his post-game religious ritual.

Berry said they plan to appeal Kennedy’s case to the Supreme Court.

Welcome to the America that was fundamentally transformed by President Obama and his activist judges.