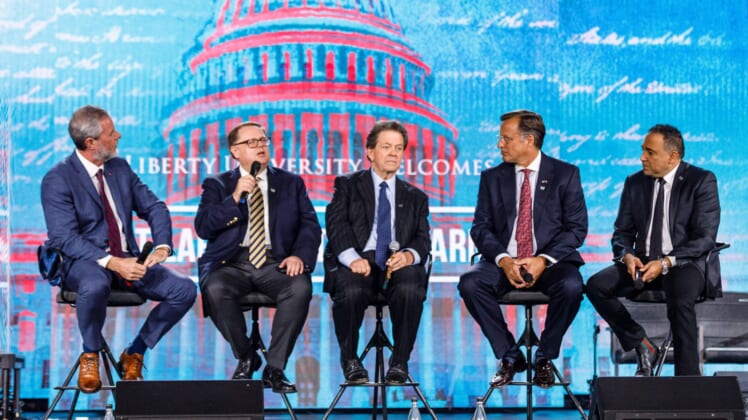 Fox Nation host Todd Starnes told thousands of students during a packed convocation at Liberty University in Lynchburg, Va. this week: “You are going to be the ones that save this nation from the rise of socialism.”

Writing Culture Jihad: How to Stop the Left from Killing a Nation, is a call to action for people of faith to take a stand, Starnes told a panel discussion on religious freedom, economics, and faith with Liberty’s president, Jerry Falwell Jr., American economist and Presidential Medal of Freedom holder Authur Laffer, and Dean of the School of Business Dave Brat.

“My book is really a call for people of faith to stand up,” Starnes said, further commenting the title of his book is purposefully “provocative” as is the time in which we live.

Quoting the late evangelical leader Adrian Rogers, Starnes said, “We are to be civil, but not silent.”

Claiming his roots as a small-town Baptist with a blue-collar dad, and a mom who was a homemaker, Starnes said he realized people around America were referring to people like him and those at Liberty when they accused them of clinging to their Bibles and guns – and of being “deplorable” and “irredeemable.”

“I am proud to call myself a gun toting, Bible-believing, son-of-a-Baptist,” Todd said to a roaring audience, while the panelists laughed. “I’m not bitter; I’m blessed. And I’m not irredeemable; because I’ve been redeemed by the blood of the lamb.”

Starnes said his call to action emanated after realizing President Donald Trump’s election exposed a rise of socialism “festering” just under the surface of American culture.

“I realized that under socialism our freedoms were coming under attack,” Starnes said, “specifically the freedom of religion, religious liberty, free-speech, [and] the right to bear arms.”

Without getting in people’s face, but by telling the stories about how Christians are facing attacks in the marketplace because of their beliefs – like in Culture Jihad – Starnes promised to come alongside the young people at Liberty and urged them to be “happy warriors” while taking a similar stand.

In his new book, Starnes said there is a story about Oliver Hart, a preacher from Charleston Baptist Church in South Carolina, who preached liberty and freedom from his pulpit and went around rallying people to fight against the British in the Revolutionary War. Finding those who would fight the British apparently was not easy, according to Starnes, who said ironically, “They came to the church house first.”