Democrats Declare War on “In God We Trust” 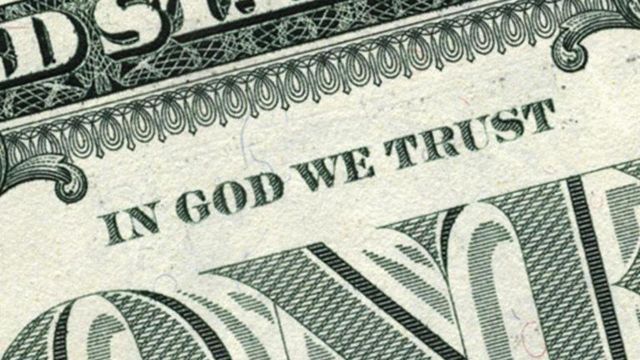 It’s on our dollar bills and it’s on a lot of government buildings — but should “In God We Trust” be in public schools?

There’s a raging debate over that issue in Minnesota where a Republican lawmaker introduced a bill that would allow the national motto to be displayed in public school buildings.

“I thought it would be a slam dunk,” Sen. Dan Hall said on the Todd Starnes Radio Show. “I did not expect the controversy.”

Sen. Hall and Democrat Sen. John Marty squared off on the issue during a radio rumble on the Monday edition of my nationally-syndicated talk show.

“The money in my wallet has to say ‘In God we Trust.’ I think that’s offensive,” Marty, a self-described devout Christian said.

Hall said we’ve lost a lot of Christian in the nation and that’s why he wanted to put the national motto front and center in public schools.

“The issue is this is something that is good and healthy for our community,” Hall said.

But Marty disagreed and said it’s important to respect people of all beliefs and no beliefs.

So, what’s really behind the objections to the national motto? One word: diversity.

It’s not respectful for people who have different religious beliefs,” Marty said. “Our schools are very diverse. We ought to treat everybody with respect.”

“I’m wondering if Sen. Hall would feel the same if students walked in and instead of the word ‘God’ – the word ‘Allah’ – which is the word for God in the Muslim region – welcomes students to their schools,” Dibble said during debate on the legislation.

Well, that’s a fairly easy question to answer. The United States of America does not put its trust in Allah. We put our trust in God – Almighty God.