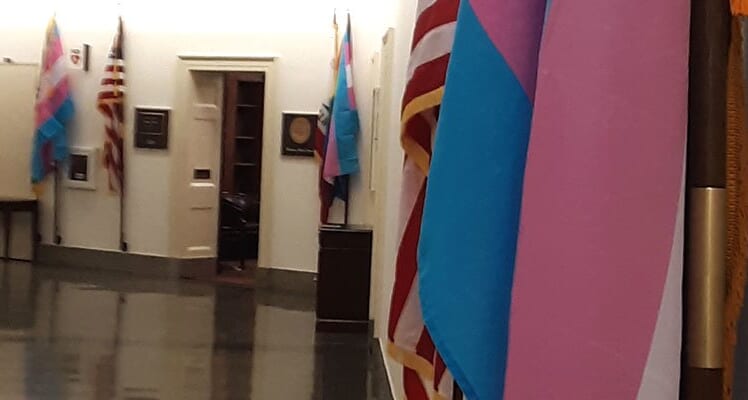 A number of Democrat lawmakers on Capitol Hill temporarily replaced the POW/MIA flags posted outside their offices with flags honoring the transgender movement.

“It’s a jarring sight on the 5th floor of the Longworth House Office Building,” Family Research Council President Tony Perkins wrote in his Washington Update column. “A sea of baby blue and pink flags greets everyone who walks by — an unpleasant reminder of just where the new majority’s priorities are. Not that anyone really needed reminding.

As a proud member of the @LGBTEqCaucus, I will do everything I can to make sure transgender people #WontBeErased by violence, fear or prejudice. I am committed to safety and equality for all. #TransVisibilityWeek pic.twitter.com/eB9nihPsaI

The transgender pride flags were raised by Democrats to celebrate International Transgender Day of Visibility.

The newspaper reports at least one Republican office was asked to replace its POW/MIA flag with the transgender pride flag but refused to do so. Good for them!

“Thank goodness for true House conservatives, who are willing to stand up to a party that’s willing to put POW flags in the closet so transgenders can come out of theirs,” Perkins wrote. “Political correctness doesn’t win wars — and it’s time we put an end to policies that pretend it does.”

“We take no issue with members of Congress honoring additional groups, but it should be in addition to rather than instead of our heroes, many of whom made the ultimate sacrifice for our country,” he said in a prepared statement. “These servicemen and servicewomen went missing while defending all Americans. Their flags should not go missing as well.

“The American Legion urges that every member of Congress honor these heroes by ensuring the POW/MIA flag is properly and permanently displayed outside their offices,” he said.

The flags are not the only things missing on Capitol Hill these days — so is common sense.