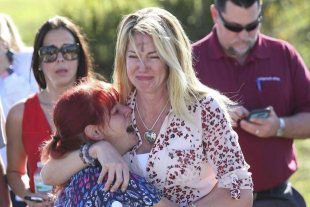 Fox News Radio host Todd Starnes took the mainstream media and public -school education to task for misinforming children and using them as props in their pursuit of stricter gun regulations during his opening monologue Monday.

“The mainstream media is using teenagers as a human shield to the president, the National Rifle Association, and the second amendment,” Starnes said on his nationally-syndicated radio program. “This is right out of the Saul Alinsky propaganda playbook ladies and gentlemen, and it’s getting ugly.”

Starnes prefaced audio clips of the teenagers on mainstream media outlets by saying “we’re not going to attack the kids. But we are going to correct misinformation coming from the kids. We have an obligation to do that.”

After playing multiple clips of survivors of the Parkland shooting in south Florida, Starnes railed against the state of public education in America, calling it “indoctrination.”

“These young people,” Starnes said, “have been brainwashed by their teachers. They’ve been brainwashed to believe there’s something wrong with the first amendment. That free speech is not for everybody. That freedom of assembly should be outlawed so can you really blame the children for what’s coming out of their mouths right now? No, you can’t, because this is what they’ve been trained to say by the liberal indoctrinators. This is how they have been educated. This is what’s coming out of our public-school system.”

Starnes corrected several of the statements made by some of the school’s teenage spokesperson –  including that Trump controlled both houses of Congress and that the NRA was killing children.

“I want to set the record straight, Starnes said. We’ve got a big problem in America. What happened in South Florida, has nothing to do with gun control. Nothing at all. This has everything to do with a complete breakdown in the government ladies and gentlemen, and a complete breakdown in the FBI. And by the way, the person responsible for what happened in that high school, is not President Trump. It’s not even President Obama. The person responsible for what happened last week at that public high school, is a crazed monster, who carried out a massacre in a gun free zone.”