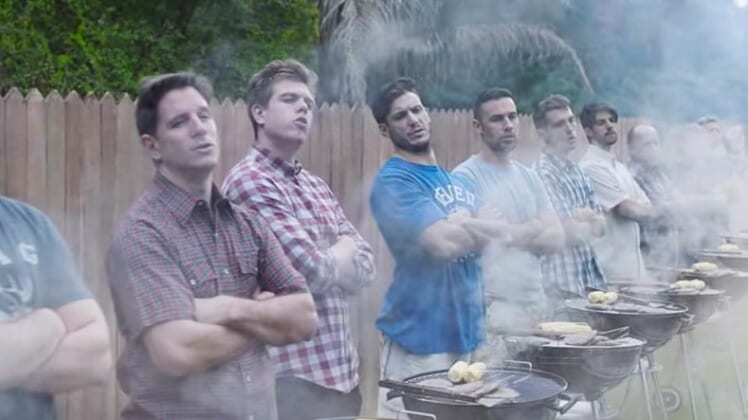 The makers of the Gillette razor have a message for the men who use their products: you are horrible, horrible people.

P&G released a two-minute commercial that accuses men of being incubators of sexual harassment and bullying and toxic masculinity.

“Is this the best a man can get? Is it? We can’t hide from it. It has been going on far too long. We can’t laugh it off, making the same old excuses,” a narrator declares.

The ad condemns the phrase “boys will be boys” and then proceeds to show guys chasing around women, engaging in bullying and basically acting like every anti-male stereotype you’ve ever seen.

“This is an important conversation happening, and as a company that encourages men to be their best, we feel compelled to both address it and take action of our own,” P&G’s Pankaj Bhalla told the Wall Street Journal. “We are taking a realistic look at what’s happening today, and aiming to inspire change by acknowledging that the old saying ‘Boys Will Be Boys’ is not an excuse.”

Instead of virtue signaling, I was sort of hoping Gillette would declare war on razor burn, but whatever.

Gillette wants all of us guys to hold each other accountable for our behavior – and they have dedicated themselves to promoting positive, attainable, and inclusive versions of what it means to be a man.

And therein lies the issue – what constitutes the ideal version of a man over at Proctor & Gamble headquarters? John Wayne or Pajama Boy?

There’s no doubt that men who bully and sexually harass women need to be – and must be – called out. But society wants us to believe that masculinity breeds such behavior – that inside the heart of every man is a bully and a boor.

There is literally a war on masculinity in America. It’s being waged in classrooms where professors are trying to convince a new generation of students that there’s something wrong with men who want to protect and provide for their families.

They want you to believe little boys who climb trees and tussle on the playground should be medicated. They believe there’s something evil about letting boys be boys.

My friend, the conservative commentator Allie Stucky, addressed this issue in a powerful “Prager University” segment.

“The growing problem in today’s society isn’t that men are too masculine; it’s that they’re not masculine enough,” she said. “When men embrace their masculinity in a way that is healthy and productive, they are leaders, warriors and heroes. When they deny their masculinity, they run away from responsibilities, leaving destruction and despair in their wake.”

In other words, men behaving badly is not a chromosome issue, it’s an issue of the heart.

“Here’s a secret that every woman knows: Women want real men—men they can count on and, yes, look up to. No amount of feminist theory will change that,” Stuckey said. “I don’t know any woman, at any age, who is attracted to a passive man who looks to her to be his provider, protector and leader. Every woman I know wants a strong, responsible man. That’s not a consequence of a social construct or cultural pressure—it’s innate.”

And that’s what bothers me the most about the Gillette commercial. It’s an incredibly unfair stretch to lump all men into the hashtag “me too” basket.

Most of the guys I know are gentlemen – they provide for their families, they protect their loved ones and they stand up to the bullies. They’ve been doing what men have done since the days of Adam.

Enough with the gender shaming, Gillette. Before too long, they’ll be telling us to shave our legs.