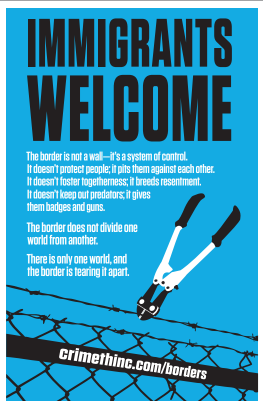 Click here for a free subscription to Todd’s weekly newsletter – a must-read for Conservatives!

“The border is not a wall – it’s a system of control. It doesn’t protect people; it pits them against each other. It doesn’t foster togetherness; it breeds resentment. It doesn’t keep out predators; it gives them badges and guns,” the poster read.

“The border does not divide one world from another. There is only one world, and the border is tearing it apart,” the poster read.

Eugene, Oregon radio station KLCC reports there was also a website address on the posters — directing readers to a pro-anarchist website called, “Crimethinc.com.

Crimethinc describes itself as a “rebel alliance” and an “international network of aspiring revolutionaries extending from Kansas to Kuala Lumpur.”

The organization is a “secret society pledged to the propagation of crimethink.”

So why would teachers at an elementary school expose children to a self-proclaimed “international network of aspiring revolutionaries?”

A spokesperson for the local school district told the Todd Starnes Radio Show they were not aware the posters originated from an organization with anarchist leanings.

Over winter break, construction workers noticed the propaganda posters and tore them off the walls — prompting outrage from the school district as well as local residents.

It seems to me the construction workers committed an act of public service — but the school district argued that it was vandalism.

Meanwhile, the school spokesperson confirmed to the Todd Starnes Radio Show that some of the anarchist-related posters have been replaced.

“It’s important for all families to feel safe and welcome in our schools,” the spokesperson said. “School and district staff are processing how best to show support for students and families of all immigration statuses.”

Well, for starters the school district could discourage students from taking up arms against the federal government by waging anarchy in the streets.