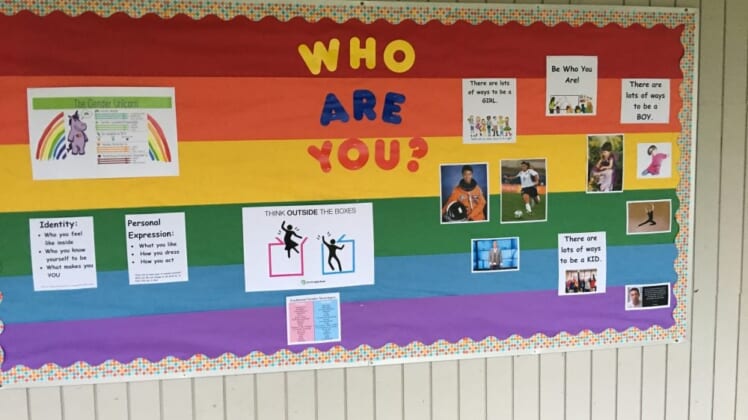 Parents are furious after a California elementary school posted a bulletin board that addressed issues like sexual identity and encouraged children as young as four-years-old to break out of gender stereotypes.

“For him to be a role model for four-year-olds to 11-year-olds is utterly disgusting, one anonymous parent said on the Todd Starnes Radio Show. “He’s not someone you want to put up at an elementary school.”

The bulletin board included Mr. Savage’s photo (fully clothed) along with the following quote:

“A lot of kids are bullied because of their sexual identity or expression. It’s often the effeminate boys and the masculine girls, the ones who violate gender norms and expectations who get bullied.”

In 2012 Mr. Savage bullied a group of Christian teenagers who walked out of a journalism conference after he launched a profane attack on the Bible. He called them “pansy-a**ed.

And there was that time he tried to infect a Republican candidate with a flu virus – and how can we forget about the time he wished congressional Republicans would “f***ing die.”

“The man does nothing but spew vitriol at people he does not like – like religious groups and conservatives,” she said.

The parent, who has a first-grader and a fourth-grader at the public elementary school, said the gender bulletin board has created a firestorm. Of particular concern – the school used a unicorn as a propaganda tool.

The so-called “Gender Unicorn” introduced children to concepts like gender identity, gender expression and gender presentation. It also included words like “sexually attracted to” and “romantically/emotionally attracted to.”

“A unicorn – an object loved by little children – was used to lure them to the bulletin board,” the parent said on the Todd Starnes Radio Show. “It felt like it was a creepy way to lure a child over to the board and confuse them about gender.”

The San Ramon Valley Unified School District said the bulletin board is meant to highlight a monthly theme.

“For January the theme for the month is ‘breaking out of gender stereotypes,” a district spokesperson said.

“The school has a parent-led Inclusion and Diversity Committee that maintains a bulletin board to highlight a different theme each month within the rubric that all students, staff and parents are safe and welcomed on campus,” the spokesperson added.

The school did modify parts of the display after parents raised concerns about age-appropriate content. They said the initial content was only up for about four hours.

“The quote and photo were removed as part of the revision,” the spokesperson said.

There are still two questions that have yet to be resolved.

First, why is the school district using a unicorn to confuse children about things they ought not to be confused about?

And secondly, what was school leadership smoking when they decided that a person like Dan Savage would be a good role model for four-year-olds?