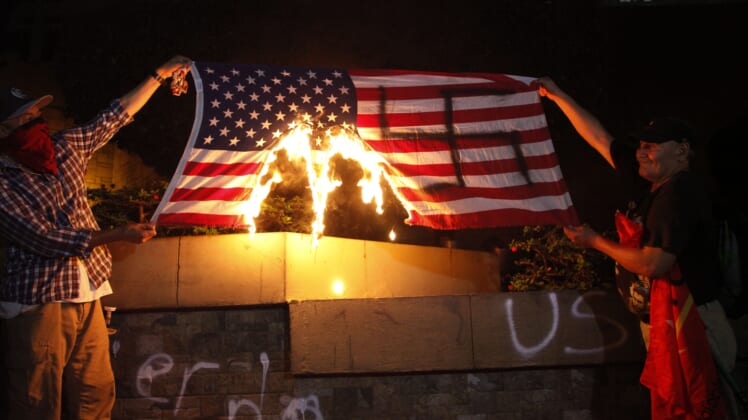 Two people burn a United States flag during a protest in favor of the caravan of migrants that is currently stuck on the Guatemala-Mexico border, in front of the American embassy, in Tegucigalpa, Honduras, Friday, Oct. 19, 2018. The U.S.-bound caravan that once totaled more than 3,000 Central American migrants looked to be about a third that size Saturday morning, when its remaining members woke up on a bridge that divides the borders of Guatemala and Mexico and waited to get past a crossing guarded by hundreds of Mexican federal police. (AP Photo/Fernando Antonio)

Protesters in Honduras defaced an American flag with a swastika before setting it ablaze in front of the American embassy.

The Associated Press reports the protesters desecrated Old Glory to show their support for thousands of migrants who are preparing to storm our southern border.

Photos of the approaching army indicate many of the “oppressed” migrants are in fact grown men waving Honduran flags.

Sadly, it looks like Mexico’s Police and Military are unable to stop the Caravan heading to the Southern Border of the United States. Criminals and unknown Middle Easterners are mixed in. I have alerted Border Patrol and Military that this is a National Emergy. Must change laws!

So the Hondurans claim they are traveling to America because they have been oppressed in their homeland. Yet, they continue to fly the flag of their home country.

This is not a humanitarian crisis, it’s an invasion.

I am actually a pretty pro-immigration guy, but this caravan has me a bit perplexed. They are suppsed to be down trodden refugees escaping the oppression of Honduras. Instead they seem fearless and proudly flying the flag of Honduras. pic.twitter.com/YkDWKUjE84