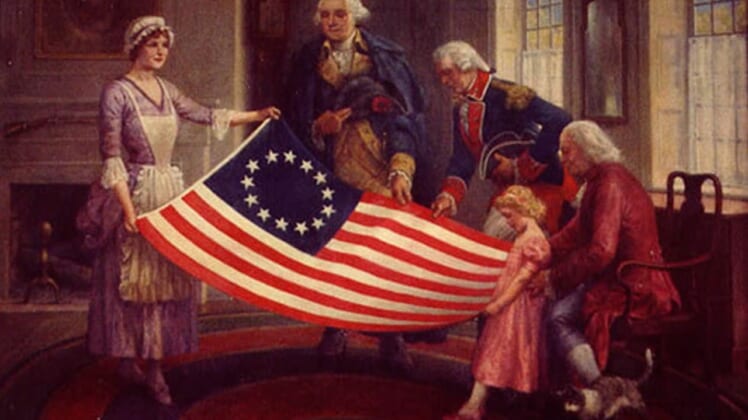 On the eve of America’s most joyous birthday celebration, Nike pooched the kick.

Why is this offensive to women?

For starters, Ross was one of America’s original feminists.

Ross was a wife, working mother and entrepreneur best known for designing and hand-sewing the first American flag. She was a true pioneer and a feminist.

Ross collaborated with the freedom-loving President George Washington and worked hours into the night. She delivered a superb product that was beyond the call of duty for a woman from her time.

Ross’s unique, 18th-century design was so well-respected that it stood the test of time and became the blueprint for what became today’s American flag. Don’t believe the American flag is special? Ask the millions of people America has liberated and they will tell you that our flag is a sight for sore eyes to millions around the globe.

Like most women, Ross was so much more than her creation. She was a devoted military wife and widow to not one, but two patriotic husbands who lost their lives during America’s fight for liberty.

As a mother of six, she grieved the loss of not one, but two children who lost their lives to illnesses of that era. When Ross’s own mother, father and sister passed away within days of each other, Ross stepped in to raise her orphaned niece. One of Ross’s grown daughters moved in with five children of her own, while she was pregnant with a sixth.

Ross was the ultimate humanitarian and caregiver. She took in nieces, neighbors and friends to live in her small home.

Through the curveballs that life threw at her, Ross managed to maintain a career and a robust business. She was a trained upholsterer who provided bed linens to the president of the United States, and she was an apprentice under the nation’s top craftsman — a unique role for women at that time. She even maintained a robust side hustle making cartridges and flags for the Continental Army.

This was one fierce, multi-tasking lady.

The far-left today wants to defame the life’s work of an honorable woman who contributed to the fabric of our country.

Betsy Ross Did Not Support Slavery

Kaepernick complained that Ross’s flag represented slavery at the time. Good luck finding any reporting that admits that. In fact, there isn’t a single historical reference to suggest that Ross supported slavery.

Nike issued a statement to say it pulled the shoe so as not to “unintentionally detract” from America’s patriotic holiday.

However, the company action has created more division in an already-divided country. Polling already indicated political interest on both sides has reached “Election Day intensity,” despite the fact that the 2020 presidential election is still 15 months away.

Not only is Nike’s response divisive and offensive to women. It’s financially foolish as well.

In the end, Nike’s public rebuke of Ross was a rebuke of the principles for which she stood.

The company sent a signal that it values a controversial, former athlete’s testosterone-fueled, male opinion more than it cared about women’s history. That kind of sexist statement veiled as “concern” is just sneaky, and women are smart enough to see through it.

This column first appeared in the Daily Caller.