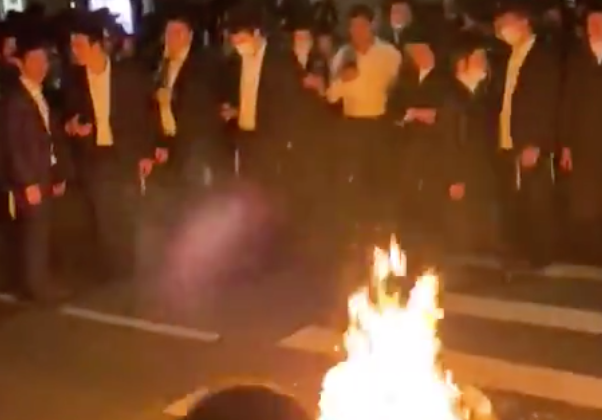 Hundreds of Orthodox Jews took to the streets in Brooklyn, New York – angry over government orders to shut down synagogues and houses of worship.

“We are not going to be deprived of the right that we have in America, like everybody else in America, the right to observe our religion,” Councilman Kalman Yeger told Boro Park News.

Governor Andrew Cuomo and New York City Mayor Bill De Blasio have implemented strict guidelines – limiting houses of worship to no more than 10 people. Non-essential businesses have also been ordered to close – along with schools.

“It’s called civil disobedience, we can fight back,” activist Heshy Tischler told the crowd after tearing up his face mask. “Do not allow them to torture you or scare you,” he said, referring to the elected officials.

The Orthodox community is enraged and accuse government leaders of targeting their faith group. Early on during the pandemic, Mayor De Blasio personally oversaw the disruption of a Jewish funeral.

The protesters marched in the streets and burned their facemasks – chanting, “Jewish Lives Matter.”

At about 1:30 a.m., FDNY firefighters and cops put out the flames, to the dismay of the protesters.

The plight of the Orthodox Jews in New York is similar to the plight of Christians in California. Government leaders seem determined to silence people of faith;

Be sure to listen to my national radio show LIVE noon to three eastern and download my free podcast at ToddStarnes.com.

HAPPENING NOW: Orthodox Jews take to the streets of Boro Park, Brooklyn, in New York, to peacefully protest new lockdown restrictions by @NYGovCuomo on places of worship, saying they single out Jews. pic.twitter.com/Y3kGnWQcyC