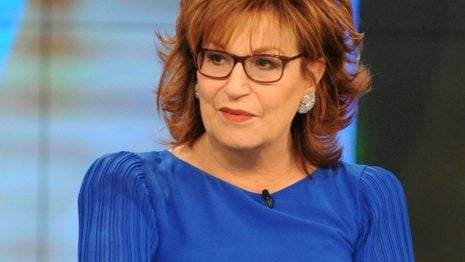 Joy Behar, one the squawking magpies on ABC’s The View, engaged in a nasty bit of Christian bashing the other day directed at  Vice President Mike Pence.

“As bad as you think Trump is, you would be worried about Pence — everyone that is wishing for impeachment might want to reconsider their life,” Omarosa said in a clip from “Celebrity Big Brother.”

“I am Christian. I love Jesus, but he thinks Jesus tells him to say things,” Omarosa told her fellow contestants.

Well, that bit of news was more than Joy Behar and the other ladies could stomach.

“It’s one thing to talk to Jesus. It’s another thing when Jesus talks to you. That’s called mental illness, if I’m not correct, hearing voices,” she declared.

She also brought up Pence’s policy of refusing to be alone with a woman without his wife present — a noble and gentlemanly concept that was ridiculed by the Weinsteins, Wieners and Lauers of the world.

“Can he talk to Mary Magdalene without his wife in the room,” the mocking magpie chirped.

It’s understandable that a Christophobe like Behar be dumbfounded by such a concept as a believer having a conversation with God. The Almighty only speaks to those who know Him – who have a personal relationship with Him.

Well, if hearing the voice God means you mentally insane — add my name to that list. Because – just like Vice President Pence – I too – have heard the voice of God. And I suspect many faithful followers of Jesus have heard His voice — including Dr. Martin Luther King, Jr.

Does Behar believe that Dr. Martin Luther King, Jr. was mentally insane, too?

Later in the segment, Behar backtracked slightly – but held firm to her belief that listening to Jesus is odd behavior.

If ABC News wants to employ an anti-Christian bigot – that is there business.

But let’s be honest – had Joy Behar said about gay people what she said about Christians – she would’ve been fired on the spot.